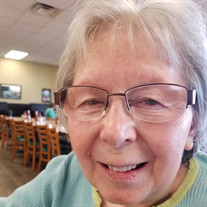 Eva Maria Regina Gnad Kimrey Eva Maria Regina Gnad Kimrey was born on Thursday, February 27, 1941 in Nurnberg, Germany, the daughter of Martin and Maria Hubert Gnad. She died in Tulsa, OK on Thursday, August 13, 2020 after a stroke a week before. She was 79 years of age. Eva was the oldest of five children. She played around the walls of the castle in Nurnberg as a child and enjoyed time spent with her Grandparents at their flower stand near the Schoener Brunnen fountain in the hauptmarkt (town square) Nurnberg. She attended business school and apprenticed as a business graduate. She fell in love with an American soldier and married the love of her life, Lynn Kimrey, on May 2, 1962 in Nurnberg. She immigrated to the United States in 1962. She became a proud US citizen in 1995. Eva loved animals, cooking, chocolate, pastries, potato dumplings, as well as spending time with and taking care of her family. She raised her family with love, laughter, good cooking, and tenderness. Later in life, she used her business skills in the bakery business and food service industries. Lynn worked for Delta Air Lines which allowed them to travel as a family throughout the world. Lynn preceded her in death on August 1, 2003. She was devasted by his passing and grieved for him the remainder of her life. She is survived by, daughter, Iris Peitz, Broken Arrow, OK. Grandson Alex Peitz and grand daughter-in-law Whitlee Clark Peitz. Son, Walter and wife Michelle Mabry Kimrey, Woodstock, GA. Grandson Kyle Kimrey. Stepson, Mike Clowdus and wife Denise of Los Angeles CA. Step grandson Michael Clowdus, Jr. Sister Ingrid and husband Karl Romer. Eva was preceded in death by her parents, Martin and Maria; Her husband Lynn; Brother, Martin Gnad, Jr.; Sisters, Maria Schenk and Regina Steiner. A graveside service will be held in Horton, MO at the Balltown Cemetery on Tuesday, August 18, at 1 pm. The family requests memorials be sent to the ASPCA.

Send flowers to the Kimrey family.