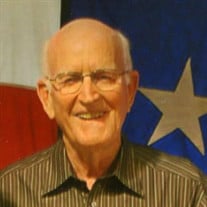 No one had more fun in this life than Gene Tate. He loved to work, he loved to play, he loved people, he loved his family, he loved his church, and he loved the Lord. He enjoyed telling stories, visiting with clerks in stores, encouraging others, sharing Jesus, and visiting with his grandchildren and playing with his great-grandchildren. He adored his wife, Reva Jewell, with whom he shared 76 wonderful years. When she passed into Heaven, he was ready to go home too. Eugene Tunney Tate was born December 27, 1926 in Madison, Nebraska. He was the 6th of 7 children born to Everett and Julia Tate. Soon after, his family moved to Mt. View, Missouri where he grew up. Gene passed from his earthly home to his eternal home on November, 10th; exactly one month to the day of Reva Jewell’s passing. The first important decision he made was when he accepted Jesus as his Lord and Savior at age 11 at the First Baptist Church in Mt. View. His next important decision was to marry the love of his life, Reva Jewell, just a few days after graduating High School. Gene was always patriotic and very proud to have served in the United States Army where he was part of the elite Honor Guard in Washington DC during WW II. The discipline and work ethic he learned in the military carried over into his life in many ways. After the war ended, he and Reva Jewell moved back to Mt. View where they purchased a farm where they welcomed two daughters, Ruthann and Joyce. He was, without question, a wonderful father and taught them many great lessons in life that became foundational in their lives, even to this day. Because of the drought of 1953, they had to abandon the farm and moved to Shawnee, Oklahoma where Gene and Reva Jewell worked for Sylvania Electric. Later, he began a successful career in Insurance which took the family to Moore, Oklahoma, then to Joplin, Missouri, and ultimately to Broken Arrow, Oklahoma. After retiring from insurance in 1994, he established and built the East 71st Street Mini Storage which the family is blessed to maintain today. He enjoyed building relationships with many of the customers over the years and they likewise enjoyed him. Gene was always very active and involved in church wherever they lived. He served as a teacher in many areas from preschool to senior adults. He was ordained as a deacon in 1949, served on several pulpit and building committees. He was a super duper greeter…loved that, and was a leader in the Grief Share ministry for years. He loved spending fun times with his daughters and their husbands, along with all his grand to great grandchildren. He always made get-togethers, trips, and outings very special. He was a wonderful teacher, role model, and inspiration for all of them. It was very important to Gene to preserve the history of his family. He was famous for taking movies of every single family gathering and occasion. He also took time to write his memoirs detailing the events of his life which will always be a treasure to family and friends. He is survived by his daughters Ruthann Wells and her husband, Larry; Joyce Watts and her husband, Richard. His grandchildren include Christy Taylor and her husband, David; Melissa Shepard and her husband, Brian; Brad Wells and his wife, Cindy; and Elizabeth Pray and her husband, Adam. There are also 15 great grandchildren, and 2 great great grandchildren. He was known as Uncle Gene to many nieces and nephews whom he loved so much. He will be greatly missed.

No one had more fun in this life than Gene Tate. He loved to work, he loved to play, he loved people, he loved his family, he loved his church, and he loved the Lord. He enjoyed telling stories, visiting with clerks in stores, encouraging... View Obituary & Service Information

The family of Eugene "Gene" Tate created this Life Tributes page to make it easy to share your memories.

No one had more fun in this life than Gene Tate. He loved to...

Send flowers to the Tate family.