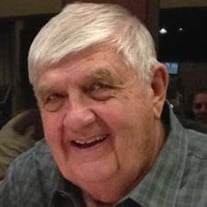 Ernest Richard Branz was born in Dwight, Illinois on Sunday, October 20, 1935 to Pete and Augusta (Nolte) Branz. He passed from this life into the presence of his Lord on Thursday, June 10, 2021 in Tulsa, Oklahoma at the age of 85. Dick was an only child and grew up in Illinois. His father died when he was still quite young, but he was mentored by a group of local farmers and encouraged to get an education beyond high school. Dick was a gifted athlete and earned a college scholarship in Basketball and Track to North Central College in Naperville, Illinois just outside of Chicago. While there, he met Joanne Dudley and the two of them hit it off. They were married on June 22, 1957 in Naperville and were happily married over 61 years until Joanne’s passing in 2019. Their love produced two sons and one daughter. Dick was a loving father and lead his family to follow the Lord and be active in church. He coached a few different sports and umpired others. He worked as a Controller for AT&T for over 30 years, living in several different states during his career. After retirement, he and Joanne moved to Florida enjoying the sunshine there. The church they joined in Florida needed a Church Administrator. Dick filled that role working tireless hours and would not accept any pay for his leadership there. He and Joanne eventually built a home in Tulsa to be closer to family and spent many years going back and forth between Florida and Oklahoma before eventually settling in Tulsa full-time. Dick was a big kidder and was his grandkids biggest fan. He collected $1 coins and when the grandkids came over to his home, he told them “go get you one!” He was a Chicago Cubs baseball fan from his early years and also loved the Nebraska Cornhuskers and Oklahoma City Thunder NBA team. Dick also loved to fish but one of his true passions was playing Bridge, which he did for some 65 years, eventually earning the level of “Grand Master”. He was an active member of Bridge Clubs wherever he lived. Dick had a Santa suit and often dressed up to “play” Santa for children in the area. After arriving in Tulsa, they became active members of Woodlake Church. He will be missed by all who knew and loved him. In lieu of flowers, Dick’s family requests donations be made to Woodlake’s Memorial Fund to support missionary work across the world. You may text 732-56 “Woodlake Branz” or send a check to Woodlake Church, 10444 S. Mingo Road, Tulsa, OK 74133 Left to cherish Dick’s memory are Son, Jim Branz (Patty) of Plant City, Florida Son, Jeff Branz (Sandy) of Broken Arrow Daughter, Cindy Nussbaum (Steve) of Tulsa 10 Grandchildren: Peter (Roxy), David (Leti), Jodi (fiancée Austin), Amanda “Honey” (Jeremy), Jason (Jaimie), Ryan (Allison), Amanda (Sam), Lauren, Emily (Kaleb) and Matthew And 11 Great Grandchildren: Franco, Hannah, Chloe, Maverick, Bella, Paxton, Addi, Kyler, Hayden, Asher, and Theo Preceding him in death are his parents and his wife, Joanne

Ernest Richard Branz was born in Dwight, Illinois on Sunday, October 20, 1935 to Pete and Augusta (Nolte) Branz. He passed from this life into the presence of his Lord on Thursday, June 10, 2021 in Tulsa, Oklahoma at the age of 85. Dick was... View Obituary & Service Information

The family of Ernest "Dick" Branz created this Life Tributes page to make it easy to share your memories.

Ernest Richard Branz was born in Dwight, Illinois on Sunday,...

Send flowers to the Branz family.