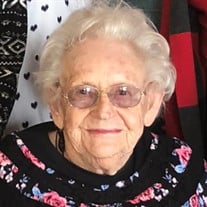 Eris Virginia Lee was born on December 28th, 1923 to parents Henry and Mada (Hand) Beck in Omaha Nebraska. Eris was surrounded by family as she peacefully left this earth on July 15, 2021 at St. Francis Hospital in Tulsa Oklahoma. Eris was spindly in stature and missed school often because she was a sick child. While small in physique, we all know her faith was strong. She learned about the commitment to the Catholic religion from watching her father and the sacrifices he made to get his family to mass which was twenty miles each Sunday. Eris and her mother studied the Catechism and attended confirmation class together. She grew most in her understanding of Catholic religion during her freshman year at Saint Peters Catholic School south of Fleming Colorado. Her life was based on faith in God and love for family. Eris had a soft spot in her heart for little things- babies, cute faces on cats, and the dandelion which was her favorite of all the wildflowers. She lived through the Great Depression that had a lifelong impact on her that instilled the value of “wear it out, use it up and make it do, and do without.” Eris would spend her time reading rather than eat or be with people. Eris felt the closest to God when she was alone. Eris married Kenneth Lee on December 31, 1941 at the Resurrection Catholic Church in Elsie, Nebraska. They had a double marriage ceremony with Mary and Ted Heinemann. A promise Kenneth made to Eris along with his vows was that she would never have to work a day in her life for the public. Her extraordinary work ethic was without measure in her home and on the farm. Their early years were full of hardships as they would move around Imperial, Madrid, and Grant from abandoned farmhouse to abandoned farmhouse without running water and wall to wall beds. She never pressured Kenneth and he eventually joined the Catholic Church of his own volition which pleased her greatly and they raised their children unified in faith. Eris formed the habit of going to Sunday mass “as long as they could drag a hind leg.” To make sure they never missed a Sunday, they would get up early to get the chores done. After ten years of marriage, and having six children, they finally were able to build a home in Otis, Colorado with running water. During their time in Colorado, they had five more children and continued dry land farming. Dry land farming was a poor man’s life so in 1967 they chose to move back to their roots in Grant Nebraska to pursue irrigated farmland. They remained there until the passing of Kenneth in 2011. Through all the hardships in life, her Catholic faith only grew stronger. Eris’ lifelong prayer was, “All for Thee, Most Sacred Heart.” She would say this prayer during the labor of each child. She would also claim this truth as she grew older during taking medication, walking with her walker and to even take her next breath. Her parting words from this life are these three…“To love deeply, pray always, and stay close to God,” “The most important thing in life is to love,” and “I would like to be remembered for loving everyone.” We know how much Eris celebrated each birth and baptism in her life, be it her own eleven children, twenty- one grandchildren, and all the way through her forty great-grandchildren. Her children are her legacy. Eris loved without measure. Eris is survived by children: Dennis & Janet Lee of Colorado Springs Colorado, Charlotte Arnold of Lakeland Florida, Cheryl & Bob Nollett of Syracuse Nebraska, Leon Lee of Grant Nebraska, Karen Aten of Broken Arrow Oklahoma, Kathleen Lee of Broken Arrow of Oklahoma, Cynthia Schneider of Enid Oklahoma, Lynette & Mark Mickelson of Shawnee Oklahoma and Tamera & Bill Reznicek of Rogers Arkansas. She is proceeded in death by her parents; Henry and Mada Beck, husband; Kenneth, siblings; Arlene Kumor and Frank, Bill Beck and Elsie, daughters; Myrna Powell, Martha Granados, son-in-laws; John Pederson, Walt Arnold, and Steve Aten. In lieu of flowers suggested donations to : Eternal Word Television Network at https://www.ewtn.com

Eris Virginia Lee was born on December 28th, 1923 to parents Henry and Mada (Hand) Beck in Omaha Nebraska. Eris was surrounded by family as she peacefully left this earth on July 15, 2021 at St. Francis Hospital in Tulsa Oklahoma. Eris was... View Obituary & Service Information

The family of Eris Lee created this Life Tributes page to make it easy to share your memories.

Send flowers to the Lee family.