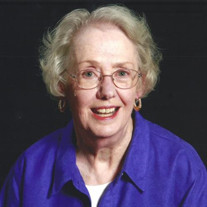 Elmarie Jones, a long-time resident of Broken Arrow, Oklahoma, passed away on Christmas Day just three days short of her 87th birthday. She was born December 28, 1933, in Temple, Oklahoma, to Ervin and Frances Miller and was their only child. She grew up in North Texas and married Murse G. Jones, Jr. in Petrolia, Texas, and they lived in Texas, Michigan and Ohio before settling in Broken Arrow in 1959. They bought a yellow house off County Line Road and raised three children and a big garden and were active in church, the community and schools. In 1966 at age 32, Elmarie attended Broken Arrow High School to complete her high school education. She became editor of the school newspaper and set the curve in her shorthand class after diligently completing her homework every night alongside her children, who were in 5th, 6th and 10th grades. She made many new friends in high school and chose to eat lunch with her classmates rather than accept the invitation to eat with the faculty. It was a proud day when she graduated with the class of 1967. During her time as a student at BAHS, she began working as the counselor’s secretary, a job she continued until 1973. Elmarie was a faithful member of First Baptist Church for 61 years and lived a life of service, which included teaching Sunday School to children, newly married women, senior adult women and, probably her favorite, the newborns in the nursery. She taught Sunday School into her early 80s, delivered sermon recordings to members unable to attend church and volunteered at Vacation Bible School for decades, along with Cornerstone Mission and Arms Around Broken Arrow. One of the most important ministries to her was the bereavement committee providing meals to church families at funeral gatherings. She served in most of these ministries weekly for many years, some for decades. One of the more remarkable ministries with which Elmarie served was Southern Baptist Disaster Relief, where she was trained as a “yellow hat” and assisted with preparing and serving food for volunteers and victims. She deployed to Galveston, Texas, following Hurricane Ike in 2008, where the Oklahoma contingent slept in a huge tent for two weeks in sweltering heat, getting up at 2:30 a.m. to work the shift that ended at 10:30 a.m. Shortly before her 80th birthday, she deployed to Moore, Oklahoma, following deadly tornadoes, where she worked for a week with the SBDR cooking team providing hot meals and encouragement to the volunteers and victims whose homes were badly damaged or destroyed. Elmarie never met a stranger and enjoyed meeting people through her travels on many scenic bus tours and trips to England, Israel and Greece with her church. She also enjoyed singing in the adult and senior adult choirs and attending Triple L and Bible Study Fellowship. She loved helping people as a volunteer at Broken Arrow Public Library, which eventually led to a part-time job. She was an avid reader and library patron. She was a devoted wife, mother, daughter, grandmother and friend and will be missed by those whose lives she touched. She was predeceased by her husband of 52 years and her parents and is survived by her children, Alinda Jones, Devereaux (Debbie) Jones, and Tamela (Doug) Lanier, and six grandchildren. Elmarie’s life will be celebrated on Saturday, January 16, 2021, at 11:00 a.m. at First Baptist Church, Broken Arrow, Oklahoma. In lieu of flowers friends may honor Elmarie’s life with a contribution to First Baptist Church, 100 W. Albany, Broken Arrow, OK 74012.

Elmarie Jones, a long-time resident of Broken Arrow, Oklahoma, passed away on Christmas Day just three days short of her 87th birthday. She was born December 28, 1933, in Temple, Oklahoma, to Ervin and Frances Miller and was their only child. She... View Obituary & Service Information