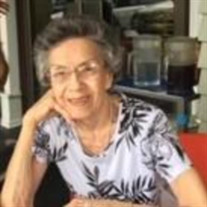 Nancy “Ellen” Dye was born in Ozark County, Missouri on Sunday, January 28, 1928 the middle of five daughters to Claud and Amy (Small) Gaulding. She passed from this life on Thursday, July 9, 2020 at Porta Caeli House in Tulsa. Ellen grew up on her parents’ farm in rural Missouri and learned the value of hard work from her parents. Her father later became a member of the Missouri Legislature. She attended rural schools until her senior year when the family moved to Ava, Missouri and Ellen graduated from Ava High School in 1945. About one later, she met a young man by the name of Gorman Dye, Jr. and after three months the two of them were married after he completed his military service. Shortly thereafter, the two of them moved to Peoria, Illinois so that he could attend Bradley University. After graduation, they began their careers and spent most of their adult lives in the Kansas City, Missouri area. Ellen became a dental assistant and worked in that field for many years. They raised a son, Jeff, as well as a daughter, Sue and she was always very proud of them. She loved the family horses. They moved to Broken Arrow in 1990 to be closer to family in their retirement years. When asked about their mother’s hobbies, Jeff and Sue both agreed that her family was her hobby. She loved attending sporting events and school activities for them as well as her grandchildren and great grandchildren as the years went by. Ellen loved to cook and make candy. The grandkids enjoyed her biscuits and gravy the most. She and Gorman loved to travel and one of their favorite places that they were able to visit several times was Hawaii. They were both very active members of Bethany Church in Broken Arrow and members of the Oasis Class there. She was also a member of the Order of the Eastern Star for over 50 years. In lieu of flowers, please consider a donation to Porta Caeli House at 2440 North Harvard Ave., Tulsa, Oklahoma 74115. Ellen is survived by: Son Jeff Dye and his wife, Mary Jane of Broken Arrow Daughter Sue Forsyth and her husband, Rick of Pauma Valley, California Two Sisters, Leta Rose of Kansas City, Missouri and Mona Decker of Ava, Missouri 5 Grandchildren: Laura Tomlinson of Surprise, Arizona Greg Tomlinson of Mesa, Arizona Adam Dye and his wife, Mandy of Stillwater, Oklahoma Alex Dye and his wife, Mallorie of Morrison, Oklahoma Aaron Dye and his wife, Jenna of Bixby, Oklahoma And 15 Great Grandchildren. She was preceded in death by her parents: Claud and Amy Gaulding Her husband: Gorman Dye, Jr. And two sisters: Lena Wallace and Mary Owens

Nancy &#8220;Ellen&#8221; Dye was born in Ozark County, Missouri on Sunday, January 28, 1928 the middle of five daughters to Claud and Amy (Small) Gaulding. She passed from this life on Thursday, July 9, 2020 at Porta Caeli House in Tulsa. Ellen... View Obituary & Service Information

The family of Ellen Dye created this Life Tributes page to make it easy to share your memories.

Send flowers to the Dye family.