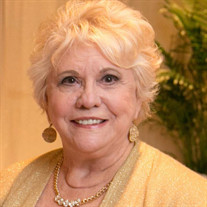 Elizabeth was born in Los Angeles, California on Wednesday, December 13, 1939, the only child of Kenneth and Pauline (Zahn) Farrell. After being a minister of the Gospel for many years, she passed from this life to her eternal home in heaven on Monday, April 12, 2021 in Sapulpa, Oklahoma at the age of 81. Her parents belonged to Sis. Aimee Semple McPherson’s church, and her mother Pauline attended L.I.F.E Bible College, (now Life Pacific University), which was founded by Sister Aimee. Just days after Elizabeth’s birth, she played the part of John the Baptist (as an infant) in one of Sis. Aimee’s dramatical performances, “Bells of Bethlehem.” Sis. Aimee, founder of the International Church of the Foursquare Gospel, dedicated Elizabeth to the Lord and prophesied over her: “This baby girl shall be an end-time handmaiden and prophetess of the Lord.” Elizabeth was raised in the Foursquare Movement, saved at age 8, filled with the Holy Spirit at 10, and called to preach at 12. Elizabeth’s family moved from California to Lubbock, Texas when she was young. She attended school there through the 11th Grade and then eventually earned her GED. For the next ten years she drifted further away from that call until she abruptly came to a crossroads. As a young teenager in Lubbock, Elizabeth met Elvis Presley, who signed her arm. Her mother made her wash it off and that was the end of that chance encounter. After marrying Clifford Pruitt on September 5, 1959, they eventually became the parents of two girls: Paula and Deana. On a routine visit to the doctor, with her children and babysitter waiting in the car, Elizabeth was given a shot of penicillin which triggered an allergic reaction. She left her body in death. She could see her girls in the car crying for her. She called out to the Lord to forgive her and she told Him that she would serve Him. His mercy reached out to her and restored her life. She kept her promise to Him and served Him faithfully from that time forward. She was an attentive mother to her two girls and continued to minister as they grew up. She was also musically gifted, able to play both the piano and accordion by ear as well as sing and write original Christian songs. In 1975, Sis. Elizabeth graduated in the Charter Class of Rhema Bible Training Center, aka Kenneth Hagin Ministries in Broken Arrow, Oklahoma. She was ordained as a Charter Member of Rhema Ministerial Association. This prophecy was spoken over her by Bro. Kenneth E. Hagin: “Great love and compassion and mercy will flow out of you to others … not only toward the lost but also toward the sick with great power. This will be as you come to learn and learn and learn. You will know more and more and more. So shall it be so and you will be made a blessing to multitudes.” Sis. Elizabeth pioneered three churches in Oklahoma - in Westville, Tahlequah, and Muskogee. She founded Faith Fellowship Church Ministries to help encourage seasoned ministers as well as those beginning in ministry. She had notable miracles take place in her ministry: God formed a set of eyeballs and gave perfect vision to a boy in the Philippines, people were completely delivered from alternative lifestyles, and a woman was raised from the dead in one of her churches. She led mission trips in several countries, among which were Russia, Finland, the Philippines, and Jamaica. Sis. Elizabeth was a published author with “Devil, You Can’t Have My Husband!” being her most notable book. At the age of 80, she received her Doctor of Divinity degree from Power and Light Gospel Bible College. She loved the Lord and her family dearly. Words her family used to describe her are passionate, forgiving, anointed, a spitfire, patient, kind and loving. In lieu of flowers, the family requests donations be made to Sis. Elizabeth’s ministry: Faith Fellowship Church Ministries c/o Paula Pruitt Wofford P.O. Box 108 Bristow, OK 74010 She leaves behind her family who she dearly loved: Daughter Paula Wofford, and her husband Mike of Bristow Daughter Deana Pruitt of Bristow 9 Grandchildren: Mary Elizabeth Councilman (Tyler), Jenna Lockstone (Adam), Jill Fields (Greg), Lindsey Shelton (Jared), Alyssa Farris (Kyle), Chase Barnett, Lauren Looney, Andrew Gettle and Cody Wofford 11 Great Grandchildren are: Ashley, Sydney, Bailey, Parker, Ellie, Adalyn, Elliot, Rook, Lehr, Hoke, and Aspen She was preceded in death by her Mother Pauline, her first husband, Clifford Pruitt, second husband, Rodger Sloan and an Uncle, J.D. Zahn

Elizabeth was born in Los Angeles, California on Wednesday, December 13, 1939, the only child of Kenneth and Pauline (Zahn) Farrell. After being a minister of the Gospel for many years, she passed from this life to her eternal home in heaven... View Obituary & Service Information

The family of Elizabeth Pruitt created this Life Tributes page to make it easy to share your memories.

Elizabeth was born in Los Angeles, California on Wednesday, December...

Send flowers to the Pruitt family.