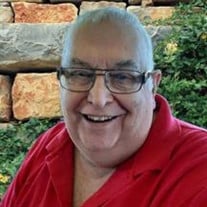 Edward J Graham, Jr. was born in Corpus Christi, Texas on Wednesday, May 14, 1952, to Edward J and Doris (Burge) Graham. He passed from this life to his mansion in heaven on Tuesday, July 6, 2021, at Hillcrest South Hospital in Tulsa, Oklahoma after an extended illness. Ed or “Eddie”, as his siblings always called him, was one of four children born to the Grahams. His father was a trick roper and rider with the Graham Western Riders who performed all across the country in his early years. His mother was a homemaker until Edward Sr. finished his time with the Riders. They moved to Salina, Kansas where they worked together owning and managing restaurants. Eventually purchasing a restaurant inside a truck stop where all three children worked as teenagers. They briefly moved to Corpus Christi, Texas where Ed and one sibling were born; but moved back to Salina after a few years. Ed went to school in Salina and graduated from Salina High School in 1970. After high school, Ed received his Associates Degree from Hutchison, Kansas Junior College. It was during those two years that he needed his appendix removed. During that illness, Ed had a vision of the Grim Reaper taking him off to hell. Shortly after that vision, Ed gave his heart to the Lord Jesus as his personal Lord and Savior. In Salina, he met Diane Rahmeier on December 26, 1981, when she was visiting friends. The two hit it off immediately, and when Diane returned to Kansas City after a few days, she called Ed to ask him if he would like to go out for New Year’s Eve. Little did Diane know that she was actually speaking with Mr. Graham, Ed’s father. He responded, “I don’t think my wife would approve of me going out with you on New Year’s Eve!” After this brief confusion got resolved, Diane was able to reach the correct Ed and asked him out. He agreed to the date, January 2nd, 1982 and they were engaged six weeks later. They married that year on October 2, 1982, in Salina, Kansas. Over the coming years, they became the parents of two daughters and a son. Ed’s career included managing restaurants, managing a Rent to Own store, selling light bulbs, and eventually selling print advertising for Transwestern Publishing and Yellowbook USA until his retirement. Not satisfied sitting on his laurels - he continued working full-time during his retirement delivering pizzas for Domino’s. His favorite holiday was always the 4th of July. He loved gathering his family for cookouts and watching fireworks together. That love of the 4th extended to their neighborhood as Ed organized an annual block party. He requests that folks who attend his Celebration of Life wear red, white, and blue to honor that love of our country’s birth and freedom. His children describe Ed as passionate, stubborn, a lover of science fiction, post-apocalyptic books and movies, and comics (especially Marvel and DC). His love for movies was passed on to his children through frequent cherished visits to the theater. He enjoyed spirited debates about politics (all in good fun). He was an avid reader of sci-fi novels and anything Stephen King wrote. He was family-oriented, spirited, patriotic, witty, and funny. His grandchildren called him Grandpa or PaPa and his daughter, Heather called him Pops or Poppy. Ed and Diane were active at Immanuel Lutheran Church for many years. While there, Ed organized a Valentine’s Banquet for the church, as well as a social event for children called Living Faith. Later, Ed and Diane would join Ablaze Church, where they have attended for the past several years and became involved in church activities. He was well known and loved at both his church homes. In his final hours of life - Ed was overheard saying several times, “I love you, Lord.” He said this with confidence - knowing he was going home. He will be missed by all who knew and loved him. In lieu of flowers Ed's family is requesting donations be made to: Ablaze Church - Edward Graham Memorial Fund for the purchase of a wheelchair the church can loan to families in need of one. Left to mourn his passing are: ● Wife - Diane of Broken Arrow ● Daughter - Shannon Marie Graham Remington (Danny) of Glenpool ● Daughter - Heather Diane Graham Shockley (Joshua) of Norman ● Son - James Edward Graham (Ashley) of Claremore ● Sister - Phyllis Wescott of Carthage, Missouri ● Sister - Daphne Johnson of St. Charles, Missouri ● Grandchildren - Aaron Remington, Diana Remington, Elias Graham, and Adilynn Graham ● As well as numerous nieces, nephews, and cousins. Those who preceded him in death were: ● Parents - Edward and Doris Graham ● Brother - James “Jimmy Ray” Graham ● Grandchild - Baby Graham ●

Edward J Graham, Jr. was born in Corpus Christi, Texas on Wednesday, May 14, 1952, to Edward J and Doris (Burge) Graham. He passed from this life to his mansion in heaven on Tuesday, July 6, 2021, at Hillcrest South Hospital in Tulsa, Oklahoma... View Obituary & Service Information

The family of Edward J Graham, Jr. created this Life Tributes page to make it easy to share your memories.

Send flowers to the Graham, family.