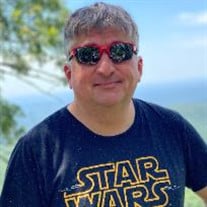 Duane Merideth Coleman was born in Ft. Smith, Arkansas on Friday, October 11, 1968 to Danny and Christina (Merideth) Coleman. He passed from this life to his eternal home in heaven on Saturday, April 3, 2021 at the age of 52 in Tulsa, Oklahoma after a sudden illness. Duane was the oldest of three boys born to Danny and Christina. The family moved to Tulsa where Duane attended school and graduated from Tulsa Memorial High School in 1987. He also attended some college classes through the years. Duane played youth football and the saxophone through high school. He married Elizabeth McMillan on September 15, 2001 and they became parents to three children: Lane, Marissa and Samuel whom Duane was very proud of. He was always supportive of his kids’ activities inside and outside of school and church. Duane always had a love for cars and for many years had one in his garage that he continually worked on. He also loved models, puzzles and cats, both inside and outside ones. But one of his true loves was cooking. This came at an early age as he enjoyed helping his father, Danny, in the kitchen, especially when Thanksgiving came around. One of Duane’s specialties was his famous chili. This love of cooking lead to a career in the restaurant industry. His last job was the restaurant manager for Santa Fe Cattle Company. Duane had a deep, spiritual side to his life. He and his children were active members of Real Church in Tulsa since 2019. Duane volunteered his cooking skills often for church functions of all types. He will be missed by all who knew and loved him. Duane is survived by: Father, Danny Coleman of Barling, Arkansas Mother, Christina Coleman of Broken Arrow Son, Lane Duchan of Stillwater Daughter, Marissa Coleman of Broken Arrow Son, Samuel Coleman of Broken Arrow Brother, Scott Coleman (Sheryl) of Frisco, Texas Brother, Chad Coleman (Rachel) of Edmond Brother, John Coleman (Natalie) of Ft. Smith, Arkansas Brother, Jacob Coleman (Olivia) of Ft. Smith, Arkansas He was preceded in death by his grandparents on both sides.

Duane Merideth Coleman was born in Ft. Smith, Arkansas on Friday, October 11, 1968 to Danny and Christina (Merideth) Coleman. He passed from this life to his eternal home in heaven on Saturday, April 3, 2021 at the age of 52 in Tulsa, Oklahoma... View Obituary & Service Information

Duane's service will be streamed live at http://youtu.be/JzlH8BVLdX4

Send flowers to the Coleman family.