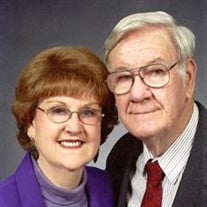 Donald Leroy Payne was born on January 7, 1933, in Tulsa, Oklahoma to Jack Clay and Lydia Pansy (Laird) Payne. He departed his earthly home in Broken Arrow Monday, September 20, 2021. Don was a 1951 graduate of Collinsville High School where he excelled in math, football, and raising prize winning Jersey cows, with one of his projects winning Grand Champion at the Tulsa State Fair and 4th place in The American Royal at Kansas City. Each calf from his 2 cows had a buyer waiting for the calf to be born. His All State football honors earned him a full athletic scholarship to Oklahoma A & M College, and he was 1 of 10 inducted into Collinsville High School’s Inaugural Athletic Hall of Fame class. After participating in ROTC at A & M, Don served in the US Army as a 2nd Lt and spent much of that time playing football at Ft. Riley, KS. Don learned shortly after being discharged from the Army and looking for a job running one of the large dairy farms that he had studied that they don’t hire college graduates but have the family running, so he decided to put his education to work raising, breeding, and selling prize Kerry Blue Terriers, which did not require a huge outlay of money. Don and Joyce’s Kerries sold all over the United States and in Germany. He paralleled his dairying knowledge and wrote a book titled “Breeding a Better Kerry.” For income Don went to work in Engineering for PSO in Broken Arrow and retired there after a long career. Don met Joyce Hurst at a square dance, and they were later married June 26, 1963, in Sand Springs, OK. They shared many interests and traveled the US on coach tours and also made several trips to Europe. But they spent the most time with season tickets to football, basketball, and wrestling at OSU and attended most of the bowl games until Don suffered an aneurism. Don and Joyce were very active in BA 1st Baptist Church Adult Community, where Joyce taught Sunday School for many years. Don was also an active member of the Broken Arrow Civitan Club for over 30 years. When Don and Joyce required full time home health care, Margie Franks came on the scene with her team of caregivers who made their life so comfortable and rewarding despite their health issues. Don’s family is so grateful for the tender loving care they gave to both Joyce and Don, especially Jovita who was always willing to play checkers with him, knowing she would likely get beat. He is survived by sisters Shirley Williams and Brenda James of Tulsa, OK and sister-in-law Wanda Payne of Cleveland, OK and a host of nieces and nephews. Don was preceded in death by wife, Joyce Payne; sisters, Kathlyn Franks, Milly Cart, and brothers, Bill, Allan, Marvin, and Roger Payne. Services have been entrusted to Hayhurst Funeral Home.

The family of Donald Payne created this Life Tributes page to make it easy to share your memories.

Send flowers to the Payne family.