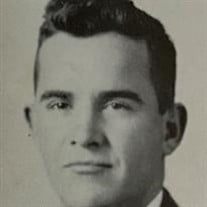 A "Come & Go" Celebration of Life for Don will be held on Friday, January 7, 2022, from 4:00-6:00 PM in the Family Room at Hayhurst Funeral Home, 1660 S. Elm Place, Broken Arrow. Food will be provided. Donald G. Mahoney was born in Sallisaw, Oklahoma on Thursday, August 9, 1928, to Michael and Wilma (Lofton) Mahoney. He passed from this life on Friday, December 31, 2021, in Broken Arrow, Oklahoma at the age of 93. Don was the 2nd of 4 children born to the Mahoney’s. His early childhood was spent in Sallisaw, but his family moved to Tulsa where he attended school and was a graduate of Will Rogers High School in only it’s second year of existence. Don joined the U.S. Navy and then transferred to the U.S. Air Force (which is the branch he always claimed) for a total of 6 years. Because of his quick and accurate typing skills he attained the job of an assistant to one of the Generals. Those six years in the military carried over as he continued to do his Physical Training until recent years. Walking and pushups were a part of his daily routine. After the military he came back to the Tulsa area for a couple of years. But he and his best friend on a whim headed to sunny Florida and both got jobs there. That is where he met Julie Scott, whom he married after a brief courtship. They had their three daughters there in Florida, then he relocated his family to Tulsa and they had a son. Although the couple divorced, they remained close friends until Julie’s passing in 2001. Don had moved back to Florida by that time, but he returned to help his children through the loss of their mother. He enjoyed golf, biking, and fishing while living in Florida. When he retired from the University of South Florida in 2007, he moved back to Tulsa to be closer to his children and grandchildren. He moved in and shared a home with his son, Shane. They were like “Oscar and Felix” of the Odd Couple for the last several years of his life. Don was always a “cut up” and had fun wherever he was. He will be missed by all who knew and loved him. Left to cherish his memory are daughter, Roxanne Mahoney Daughter, Shannon Caldwell (James) Daughter, Jamie Mahoney Son, Donald Shane Mahoney Brother, William Mahoney 8 Grandchildren: Zachary, Brendan, Brittany, Joshua, Ashlyn, Jacob, Hunter, and James And 10 Great Grandchildren Those who preceded Don in death are his parents, one brother, Robert and one sister, Mary

A "Come & Go" Celebration of Life for Don will be held on Friday, January 7, 2022, from 4:00-6:00 PM in the Family Room at Hayhurst Funeral Home, 1660 S. Elm Place, Broken Arrow. Food will be provided. Donald G. Mahoney was born in Sallisaw,... View Obituary & Service Information

The family of Donald G. Mahoney created this Life Tributes page to make it easy to share your memories.

A &quot;Come &amp; Go&quot; Celebration of Life for Don will be held on Friday,...

Send flowers to the Mahoney family.