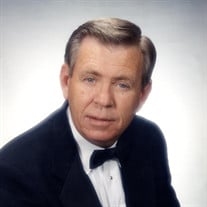 Donald Ray Devore was born on September 18, 1938 to John and Jeanette (Scott) Devore in Brice, Missouri. He left this earthly home from Tulsa, Oklahoma on Sunday, May 16, 2021 at the age of 82. Services will be held at the First Baptist Church in Broken Arrow, Oklahoma at 11:00 am, Wednesday, May 26th under the direction of Hayhurst Funeral Home. Burial will follow at Choctaw Elmwood Cemetery, Choctaw, Oklahoma. Don was the oldest of seven children. He graduated from Buffalo High School, Missouri in 1956. He entered the Air Force and served his country from 1958-1964. Don met the lovely Eudora Jewell (Judy) Ohmart and they were married on February 3, 1961 in Midwest City, Oklahoma. They recently celebrated their 60th wedding anniversary this year. They raised one son and one daughter and have five grandchildren. Don was a highly intelligent man and made his career as a meteorologist for 42 years. He began his weather training in the 6th Weather Squadron in the United States Air Force. He started working at the National Weather Service in Oklahoma City in 1964, worked in Mississippi and Texas, and finally returned to Oklahoma City. He became a trainer for severe weather spotters, including law enforcement. He gave many weather preparedness training talks to groups and schools all over Oklahoma. He worked at the NSSL (National Severe Storms Lab) in Norman as part of the JDOP (Joint Doppler Operational Project) team that developed and established what has become known as the NEXRAD (Next Generation Radar) network used by meteorologists today. He was employed as the Meteorologist in Charge of the National Weather Service in Tulsa, Oklahoma from 1988-1996. He retired in 1997 from the National Weather Service Radar Operations Center in Norman, OK. Don was a Mason and belonged to the Del City Masonic Lodge and the Midwest City and Broken Arrow Eastern Star Chapters. He was a Past Grand Patron of the Oklahoma Order of the Eastern Star and was currently serving as a General Grand Chapter Committee Member. He was also a member of the Guthrie Scottish Rite and Muskogee York Rite. He is survived by his wife, Judy of Broken Arrow, Oklahoma Son, Kirby Devore and his wife, Linda of Norman, Oklahoma Daughter, Cheryl Jones and husband, Jeff of Norman, Oklahoma 5 Grandchildren, Blake Jones, Taylor Jones, David Devore, Nathan Devore, Emmaline Devore 2 Brothers, Gary Greenwald and Rick Greenwald 3 Sisters, Delores Summers, Carmen Bostic, and Karen Crawford Don was preceded in death by his father, John Devore, mother, Jeanette Greenwald, stepdad, George Greenwald, and sister, Jan Clark.

Donald Ray Devore was born on September 18, 1938 to John and Jeanette (Scott) Devore in Brice, Missouri. He left this earthly home from Tulsa, Oklahoma on Sunday, May 16, 2021 at the age of 82. Services will be held at the First Baptist Church... View Obituary & Service Information

The family of Donald Devore created this Life Tributes page to make it easy to share your memories.

Send flowers to the Devore family.