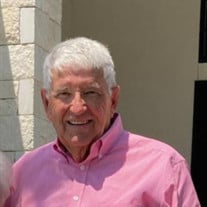 Donald Cosson passed away at age 83 on Saturday, August 7, 2021, surrounded by his family. He was born in Florida on November 30, 1937, to Emmette & Mae Cosson. Donald graduated from Baker High School in 1955 as an All-State basketball player. Shortly after graduating, Donald met his wife of 60 years, Marion. They fell in love, got married, and had two children. After 30 years at Ford Motor Credit and many years of traveling, the two settled down in Tulsa, Oklahoma, while frequenting their home in Crestview, Florida. Donald was an army guard national veteran, a husband, a father, a grandfather, a great-grandfather, a golfer, a Florida Gator’s fan, and a friend to all. Anyone lucky enough to meet Donald immediately noticed his faith in God, his wisdom, and his love for those around him. Donald loved The Lord. It was not uncommon to hear him praying as he went about his daily tasks; he spoke to God as a friend. As a man of few words, people listened when he spoke. While he often made a funny remark, garnering laughs from everyone who’d heard, he’d also give great advice. He based this not only on his many life experiences, but on what the Bible instructs us to do. Donald loved unconditionally. Donald is now in his Heavenly home alongside his parents, Emmette & Mae, and his sister, Carol. He is survived by his wife, Marion; daughters Angie Marshall and Jamie Ogden; son-in-laws Paul Jines and Randy Ogden; brother, Clark Cosson; sisters, Jeanne Langley and Juanita Singletary; grandchildren, Chris, Turner, Katherine, Sarah, Laura, Luke, and Sam; great-grandchildren, Camden and Elijah; his Milligan and Woodlake church families; and many extended family members. Donald will be dearly missed and never forgotten. A Celebration of Life Service will be held at 2:00pm on Wednesday Aug 18, 2021 at Woodlake Church with Pastor Jamie Austin officiating. In lieu of flowers, donations may be made to One Hope, ATTN: Bob Hoskins 1445 N Boonville Avenue Springfield Mo 65890-0206.

Donald Cosson passed away at age 83 on Saturday, August 7, 2021, surrounded by his family. He was born in Florida on November 30, 1937, to Emmette & Mae Cosson. Donald graduated from Baker High School in 1955 as an All-State basketball... View Obituary & Service Information

The family of Donald Cosson created this Life Tributes page to make it easy to share your memories.

Send flowers to the Cosson family.