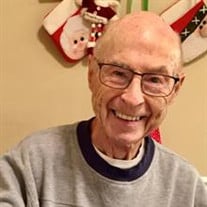 Don King was born on Saturday, May 22, 1937 in St. James, Minnesota one of seven children to Arnold and Rosa (Strandberg) King. He passed from this life to his heavenly home on Tuesday, January 5, 2021 in Tulsa, Oklahoma at the age of 83. Don was raised in a different time and place than the world children live in today. At the age of 15, he would hitchhike several miles to the Green Giant Factory to work each summer during his high school years. He was a good athlete in school and graduated from high school in 1955. After that, he joined the U.S. Navy. Funny thing was, he didn’t really like to swim or enjoy the beach. His family laughed about the fact that he would take them to the beach wearing sweats from head to toe! After his time in service to our country, he began working for Woolworths. While managing a store in Omaha, Nebraska one of his employees in particular caught his eye. He offered Julie Scott a ride home from an office Christmas party and began courting her soon thereafter. They married on April 27, 1968 in Omaha, Nebraska. He became the father to two girls and one son. Don loved being a father and was a great role model for his children, coaching little league sports teams and attending school events, always being supportive of whatever his children were interested in. They describe him as the kindest, most level-headed, wise, non-judgmental but ornery person they’ve ever known. His first answer to them about any of their requests was always “no” but only so that they would ask him again. He remained active his entire life participating in many sports. He was an avid jogger until recently and played many rounds of golf. Don was a great dancer. About the only thing he couldn’t do was roller skate. On a trip to visit his son and family in California on their ranch, Don jumped right in with the daily chores, mucking out the horse stalls, mending fences and doing whatever needed done. He was truly a hero to his kids and grandkids, who called him “Papa”. Although raised in a strong Lutheran home, around the age of 50, Don was radically reborn in his spiritual life and lived out his newfound faith on a daily basis. He truly loved the Lord and his family, in that order. He will be truly missed by all who knew and loved him. Don is survived by, Wife, Julie of their home in Broken Arrow Daughter, Julie Kae King of Broken Arrow Son, Jason Anthony King and wife, Betty of Valley Center, California Daughter, Amanda Anne King of Broken Arrow 5 Grandchildren: Kaitlin, Johnathan, Jovi, Kirk and his wife, Alicia, and Tyler and his wife, Megan And 1 Great-Grandchild, Zoey Brother, Melvin King and his wife, Ada of Oshkosh, Wisconsin Brother, Darryl King and his wife, Audrae of Mankato, Wisconsin Sister, Barbara Bjornson and her husband, Rick of St. Paul, Minnesota Brother, Michael King and his wife, Rhea of Mankato, Minnesota He was preceded in death by his parents, Arnold and Rosa King, brother, Jim King and sister, Judy King

Don King was born on Saturday, May 22, 1937 in St. James, Minnesota one of seven children to Arnold and Rosa (Strandberg) King. He passed from this life to his heavenly home on Tuesday, January 5, 2021 in Tulsa, Oklahoma at the age of 83. Don... View Obituary & Service Information

The family of Don King created this Life Tributes page to make it easy to share your memories.

Send flowers to the King family.