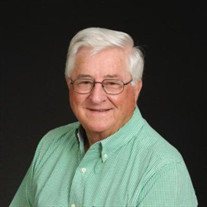 Donald Mack Arnold, 93, passed away, October 29, 2021 surrounded by his family. He was born November 18, 1927 to Wiley and Bertha Omar Arnold in Broken Arrow, OK. Don was the third child/son born to Wiley and Bertha. He attended Broken Arrow Public School graduating with the Class of 1946. Upon graduation Don worked for Sinclair Coal Company until he was drafted and served in the Korean War 1950 – 1952. He was stationed in Germany with the Medical Corp. In addition, Don also served with Oklahoma National Guard from September 1952 to January 1957; Sergeant 1st Class. Don married Norma Rae Lemon on December 24, 1950, just 7-days before he left his beloved Norma for his assigned duties with the US Army in Germany. They were not reunited until 17-months later. Don would joke with folks about squeezing the sweetest lemon ever for 70-years. He too would always celebrate holidays in bringing Norma roses; being married and living in the City of Roses to the most wonderful woman in the world. Upon Don’s return from Germany, Don was in sales for Armor Meats and Gerald Hudson Ford. He then owned two grocery stores in Broken Arrow and later one in West Tulsa, Shop & Save, where he remained until retirement in 1989. Don started attending Broken Arrow Assembly of God Church as a child with his family and remained a faithful member until October 2017. He along with his devoted wife relocated to Grove, OK to Grandwood Assisted Living to be near his children Steve Arnold, Jimmy and Lori Arnold. Don was a faithful follower of Christ and his family can rest in the knowledge that they will see him again, one fine day when this life is over. Don is survived by his sons, Steve Arnold of Grove; Jimmy and Lori Arnold of Grove; Grandchildren David Edwards and wife Ashley of El Paso, TX; Jill Morris and husband James of Tulsa; Matt Arnold and wife Courtney of Tulsa, Chad Arnold and wife Mary of Arlington; TX, Corey Arnold of Grove, OK; Chris Arnold and wife Carrie of Huntsburg, AL. And, 13 great grandchildren. He is also survived by his baby Sister Shirley Smith and husband Gary of Coweta, OK. Don was preceded in death by his parents, his wife Norma, his brothers Elmer, Albert, Bob, sister Juanita and grandson Buddy Arnold and daughter-in-law Inger Arnold.

Send flowers to the Arnold family.