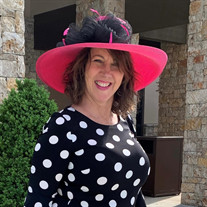 Diana S. Fletcher was born on Saturday, December 29, 1962 in Belen, New Mexico to Bert and Kathryn Gillenwater. She is the fifth of six siblings and loves the big family she has. She graduated Coweta High School in 1981 where she met Garry Fletcher. They dated for a few years and were married on May 23, 1987. Diana attended NSU for a semester before she went on to work at Rhema Bible College in the administration office. Much to her family’s shock, she and Garry waited almost 10 years before having a child, and once they had Lauren in 1997, they popped out 3 more right after. Lindsey in 1999, Madison in 2001 and Michael completed the bunch in 2004. Diana was always meant to be a mother, she has a heart for children, she loved on the kids in children’s church and her friends’ kids like they were her own. When she had children of her own, her world became them. She doted on her family and children and graciously ran a household worthy of a Proverbs 31 kind of woman. She never missed a theatre performance, taekwondo meet, or ball game. She always gave her children what they needed, wanted, and then some. Her heart is huge for family and friends. She wanted to always be a blessing. She wanted to give her kids the world, she took them on trips and lavished them with love always. There are many fond memories of family dinners and she opened her home to extended family too. She always participated in games, laughter, adventure, and of course basketball on the driveway with Michael. She has always been full of laughter and a beautiful zest for life that we should all strive to have. She enjoyed eating healthy and exercising and could be found taking walks often. She was the receptionist for Executives Title and always greeted every person with life and smiles and the love of Jesus she so deeply knew. Perhaps the most admirable thing about Diana is her heart for Christ. She woke up every single day of her life and sought God as a vital necessity. She knew she was not perfect, but redeemed by the grace of Jesus. Her faith showed up everywhere she went, every person she met and interacted with, and she held fast to it always. She was a prayer warrior, and had special prayer warrior friends like Rhonda and Irma whom she often called upon to join her. She loves her friends and family and knew what the real important things in life are. She has a deep and intimate relationship with her Heavenly Father, one that her children will strive to emulate. The greatest gift she gave people was an understanding of the love the Father has for His children. Everyone that met her knew how absolutely gorgeous she is, and she is as beautiful inside as she was out. Her short battle was fought with tenacity, faith and strength. Her light and legacy will live on through every single person that knew her. Diana went home peacefully to be with the Lord on Tuesday July 27, 2021 at the too young age of 58. We will miss Diana every single day until we get to be reunited with her in glory and take solace in the promise that we will see her again. The family welcomes flowers or donations to the Susan G Komen foundation for breast cancer in Diana’s honor. https://secure.info-komen.org/site/Donation2 Diana is survived by Husband Garry Fletcher of Broken Arrow, Oklahoma Daughters Lauren Fletcher of Tulsa, Oklahoma Lindsey Fletcher of Broken Arrow, Oklahoma Madison Fletcher of Broken Arrow, Oklahoma Son Michael Fletcher of Broken Arrow, Oklahoma Brother Dennis Gillenwater of Tahlequah, Oklahoma Sisters Juanita Edwards of Broken Arrow, OK Margie Gillenwater of Tulsa, OK Sharon Reed of Porter, Ok Carol and Robert Parker of Tulsa, OK Many nieces and nephews and dear friends, all of whom she prayed for always. Preceded in death by her parents Bert and Kathryn Gillenwater, her brother in law Terry Reed and nephew, Daren Young.

Diana S. Fletcher was born on Saturday, December 29, 1962 in Belen, New Mexico to Bert and Kathryn Gillenwater. She is the fifth of six siblings and loves the big family she has. She graduated Coweta High School in 1981 where she met Garry Fletcher.... View Obituary & Service Information

Send flowers to the Fletcher family.