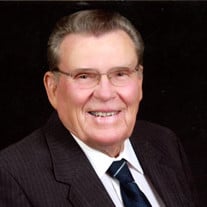 Services for Delbert Hargrove will be on Friday, May 21 at 2:00 PM at the Assembly of God Church in Haskell officiated by Rev. Donald Hogue, Jr. followed by burial at Haskell Cemetery. There will be a Visitation with his family the evening before on Thursday, May 20 from 6:00-8:00 PM at Hayhurst Funeral Home in Broken Arrow. Viewing will be on Thursday from Noon-8:00 PM. Delbert Gene Hargrove was born in Haskell, Oklahoma on Thursday, December 1, 1932 to William A. and Mattie (Fitzpatrick) Hargrove. He passed from this life to his eternal home in heaven on Tuesday, May 18, 2021 in Tulsa, Oklahoma at the age of 88. Delbert was one of six children born to the Hargrove family. His parents farmed and even as “Del” grew older he never got too far away from those roots and the work ethic he learned as a young boy. He attended school through the 8th grade and would later complete his GED after both Steve and Randy were born. He married Mary Jewel Pardue in 1952 in Haskell and they moved to Tulsa where he went to work for Nelson Electric Manufacturing. He worked his way up and took on the sales position traveling the U.S. in a demonstrator van showing Nelson Heat Trace products. He owned his own business for several years and finished his working career at Green Metal Fabricators in sales. As a father he helped coached both boys’ baseball teams. Del took his family camping at the lake several weekends a year. Fishing and water skiing were two of the things he really enjoyed and was a bit of a daredevil on skis. He would take off from the boat dock with Jewsl driving the boat, make several passes and then have her sling him back toward the bank without him even getting wet. This worked most of the time but on one particular pass he was going a little too fast and crashed into the rocks ending up with a broken nose. He always had horses and cows on some pasture land he owned on Lynn Lane and showed some of his Appaloosas at the national level. He lovingly cared for Mary Jewel until she passed in 2008. A few years later, he met and married Shirly. They lived in the home on Lynn Lane until Del’s memory issues became dangerous and it was clear that he needed more fulltime care. The nurses and staff at Prairie House Assisted Living loved Del. He was known as the sweetest, kindest man there and was always willing to help them or other residents with anything anyone needed. He will certainly be missed by all who knew and loved him. In lieu of flowers the family requests donations to Alzheimer’s Association at www.alz.org He is survived by wife, Shirley of Broken Arrow Son, Steven Hargrove and his wife, Shari of Mounds Son, Randy Hargrove and his wife, Diane of Adair Brother, Ray Hargrove and his wife, Ruth of Haskell Brother, Jim Hargrove and his wife, Darlene of Haskell Sister, Beverly Denton and her husband, Ronnie of Haskell 6 Grandchildren: Chad Hargrove, Brad Hargrove, Stephanie Redding (Ronnie), Shannon Adcock (Clayton), Jaclyn Dennis (Jason), and Jennifer Robinson (Chase). And 13 Great Grandchildren Delbert was preceded in death by his parents William and Mattie Hargrove, his first wife Mary Jewel, one sister Geraldine Fultz, and a brother D. B. Hargrove

Services for Delbert Hargrove will be on Friday, May 21 at 2:00 PM at the Assembly of God Church in Haskell officiated by Rev. Donald Hogue, Jr. followed by burial at Haskell Cemetery. There will be a Visitation with his family the evening before... View Obituary & Service Information

The family of Delbert Hargrove created this Life Tributes page to make it easy to share your memories.

Send flowers to the Hargrove family.