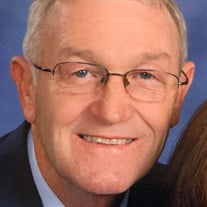 David Loyd Jones was born on Tuesday, March 29, 1949 in Broken Arrow, Oklahoma, the son of Floyd W. and Vera Lou (Philliber) Jones. He passed this life at his home in Broken Arrow on Saturday, January 16, 2021. He was 71 years of age. ​David was a 1968 graduate of Broken Arrow High School. He graduated from Northeastern State University with a degree in Music Education and Southwestern Baptist Theological Seminary with a Master’s degree in Divinity. He was on staff at Calvary Baptist Church in Broken Arrow and First Baptist Church in Beggs. In 1980 he moved to First Baptist Church in Coweta as the music and education director, and in 1987 he became the pastor until his retirement in 2017. He enjoyed ministering to people, listening to music, planning church events, going on walks, and traveling with his family. He had corny sense of humor and he always enjoyed a good joke. David never met a stranger. He would frequently go to coffee shops and visit with people; it did not matter who it was. His greatest joy came from spending time with his family and going to all the kids and grandkids activities. ​David is survived by his, Wife of 44 years,​Joyce (Emerson) Jones, Broken Arrow, OK Daughters,​​Jennifer Jones, Broken Arrow, OK ​​​Whitney and husband Bryan McIntyre, Broken Arrow, OK Sons,​​​Tyler and wife Jennifer Jones, Edmond, OK ​​​Drew and wife Christina Jones, Broken Arrow, OK Grandchildren,​Caleb and wife Kelsey, Emerson, Jackson, Madelynn, Peyton Sister,​​​Gracie and husband Preston Hale, Broken Arrow, OK Brother,​​Skip Jones, Apple Valley, CA He was preceded in death by his parents, Floyd and Vera Lou.