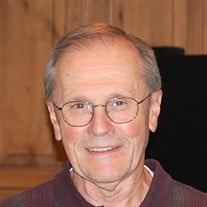 David Lee (Dave) Crandall, 82, died Wednesday, September 16, at Ascension St. John Hospital in Tulsa, Oklahoma. Dave was born in Oelwein, Iowa, on May 6, 1938, to Howard K. and Ethel (Fay) Crandall. He was the third of four siblings, with older brothers Gary and Gordon (Bing), and younger sister, Linda. He enjoyed hunting and fishing, and spending time with his many relatives in the area. The strong work ethic instilled in Dave by his parents carried through his entire life, and he had several jobs during his high school years. After graduation, he worked until joining the Army, serving at army installations in five states before his discharge in 1962. A trip to warmer weather in California with his friend, John Miller, came to a halt when they both found jobs and decided to stay in Tulsa. He met his future wife, Nancy Crider, when she moved into the same apartment building, and they married on February 19, 1965. Their daughter, Shelley Ann, was born April 3, 1970, and son, Matthew Alan, on October 17, 1972. His love for his children, their spouses and his grandchildren, knew no bounds, and he treasured every moment spent with family. Large Crandall gatherings for the 4th of July, and Thanksgivings celebrated with Nancy’s extended family also provided many special memories. Dave’s successful 30-year career with Sears encompassed big ticket sales, department management, and sales development. He was Area Sales Manager when he retired in 1993. He joined Dillard’s in a similar position before retiring for a second time seven years later. A gifted woodworker who built or restored many furniture pieces for friends and family, Dave also helped in the construction of several Habitat for Humanity houses. He spent countless hours in service to his church, the last 14 years at Harvard Avenue Christian Church in Tulsa. He was on the planning committee for the major addition completed in 2012, and it would be difficult to find any area there, inside or out, that did not benefit from his skill. Dave Crandall was loved and greatly respected for his kindness, patience, quiet humor, and willingness to share his time and talents. Dave was preceded in death by his parents, Howard and Ethel, and brothers, Gary and Gordon (Bing). He is survived by his wife of 55 years, Nancy; his daughter, Shelley Hall and husband, Michael, of Sand Springs; son, Matthew Crandall and wife, Lacie, of Broken Arrow; grandson, Nathan David Hall; and granddaughters, Shelby and Sawyer Crandall. He is also survived by his sister and brother-in-law, Linda and George Luckman; sister-in-law, Debbie Crandall; brother-in-law and sister-in-law, Alan and Barbara Crider; and many nieces, nephews, and cousins. Due to safety concerns related to the pandemic, there will be a private family service on October 2, 2020. Memorial donations may be made in Dave’s name to Harvard Avenue Christian Church, or Habitat for Humanity.

David Lee (Dave) Crandall, 82, died Wednesday, September 16, at Ascension St. John Hospital in Tulsa, Oklahoma. Dave was born in Oelwein, Iowa, on May 6, 1938, to Howard K. and Ethel (Fay) Crandall. He was the third of four siblings, with... View Obituary & Service Information

The family of David Crandall created this Life Tributes page to make it easy to share your memories.

Send flowers to the Crandall family.