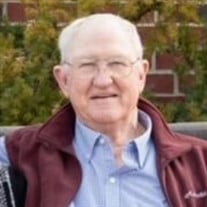 Darrell Edgar Patton was born on Saturday, December 2, 1939, the youngest of four sons to James Edgar and Frances (Nash) Patton in Stroud, Oklahoma. He passed from this life to his eternal home in heaven on Tuesday, November 10, 2020 in Tulsa, Oklahoma. Darrell grew up in Stroud surrounded by an athletic family and was himself an outstanding athlete. He went to school there and excelled in both football and basketball but at 6’6” really shined at an all-state level in basketball. He graduated from Stroud High School in 1958. He had a love for hot rod cars and hanging out with his friends. You could often find him dancing at the Cimarron Ball Room. Darrell loved to read, especially about history and politics. Western movies were his favorite. He became an Oklahoma State Football Fan and followed the Cowboys his entire life. Darrell went to work first for Shaeffer Brothers and then Textron Corporation for over 28 years as their Regional Sales Manager. He was a wonderful storyteller as his colleagues at work as well as his kids and grandkids can certainly attest to. He was able to retire at the age of 48 and spent the next several years as a private investor. During one of those years, he and a friend co-taught a course at Tulsa Community College on Investing in Stocks, which they both enjoyed immensely. He and Beverly married on January 10, 1995. They enjoyed their lives together and loved the beach. They bought a place at Gulf Shores, Alabama where they lived for a few years and loved the friends they made, especially the “snowbirds” from up north. Darrell loved his family fiercely, especially his grandkids. He was a man of strong faith in Jesus Christ from the age of 10 years on and told many people through the years how to turn their lives around and follow Him. Darrell is survived by: His wife, Beverly of the home in Broken Arrow Son, Darrell “Patrick” Patton and his wife, Kristie of Little Rock, Arkansas Stepdaughter, Sherri Vaughan and her husband, Rick of Broken Arrow Stepson, Pete Kalka and his wife, Mary of Cushing Stepdaughter, Robin Brown and her husband, Stan of Claremore 8 Grandchildren: Mary Caroline; Seth; David; Emma; Megan; Ruger; Rachael and Ryan 5 Great Grandchildren: Adyson; Ella; Olivia; Noah and Lily (and 2 more on the way) As well as numerous nieces and nephews He was preceded in death by: his parents: James and Frances (Nash) Patton; three brothers: Jim Patton, Marshall Patton and Doug Patton and one grandson: Trey.

Darrell Edgar Patton was born on Saturday, December 2, 1939, the youngest of four sons to James Edgar and Frances (Nash) Patton in Stroud, Oklahoma. He passed from this life to his eternal home in heaven on Tuesday, November 10, 2020 in Tulsa,... View Obituary & Service Information

The family of Darrell Patton created this Life Tributes page to make it easy to share your memories.

Send flowers to the Patton family.