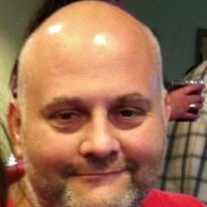 Daniel Glen Kerns was born on September 16, 1971 in Tulsa, Oklahoma. He was one of two sons born to Larry and Mary Clare (Glen) Kerns. He passed from this life on Saturday, September 19, in Tulsa, Oklahoma at the age of 49. He attended school at Eastwood Baptist in Tulsa. At the age of 20, Daniel met the love of his life, Charla. They dated for five years and then married on September 28, 1996 in Collinsville, Oklahoma. Daniel worked several different jobs including driving for the Tulsa World, construction for L.D. Kerns Contractors and Machine Tools Specialties. Daniel and Charla were inseparable and did nearly everything together. They especially enjoyed going off-roading and rock crawling in their Jeep around the Disney, Oklahoma area. Hanging out on Memorial watching the cars go by was another favorite pastime. They enjoyed going to car shows and Daniel especially got a kick out of his remote-controlled cars. He enjoyed both country music as well as 80’s music of all bands. Daniel especially loved hanging out with his friends, having people over to entertain for cookouts or birthday parties. He would always sing in the shower, but Charla told him to “keep his day job”. When he watched TV, it was usually car shows or NASCAR. He mostly enjoyed when his brother David would call him to see how his day was going. His father-in-law, Charlie gave them his old 1962 Ford F-100 truck. Daniel was in the middle of restoring it and loved the time he was able to work on that project. Although mostly a quiet man, Daniel didn’t have a problem voicing his opinion when needed. He and Charla loved to just drive around, there were times they would go for a drive and end up in Branson only to have dinner and drive back home, or go to Oklahoma City just to see what was new there. Putting miles on the car was never a problem. Most of all Daniel loved Jesus and Charla! He would tell her how beautiful she was and that he loved her every single day. He also enjoyed doing good deeds for people because it made him feel good. One cat and one very spoiled dog completed this family of four, and they will all miss him dearly. Daniel is survived by, Wife, Charla, of the home in Tulsa Brother, David and his wife, Jaycee of Tulsa Five nephews: Nick Kerns, Brent Kerns, Sam Kerns, Jacob Smith and Blaine Saxon Three nieces: Jaclyn Kerns, Lauren Colwell and Madison Rush Father and Mother-in-Law, Charlie and Jackie Taile Two Sisters-in-Law, Shawna Toler and her husband, Sylvester and Alesia Saxon and her husband Chris And numerous nieces, nephews, cousins and friends. He was preceded in death by his parents, Larry and Mary Clare (Glen) Kerns

Daniel Glen Kerns was born on September 16, 1971 in Tulsa, Oklahoma. He was one of two sons born to Larry and Mary Clare (Glen) Kerns. He passed from this life on Saturday, September 19, in Tulsa, Oklahoma at the age of 49. He attended school... View Obituary & Service Information

The family of Daniel Kerns created this Life Tributes page to make it easy to share your memories.

Send flowers to the Kerns family.