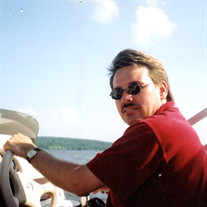 Daniel Mark Dyke was born in Detroit, Michigan on February 2, 1958. He was the last of 6 children born to Calvin Mark Dyke (deceased)and Elizabeth Marriane (Cannon) Dyke. (deceased). He grew up in Dearborn Heights, Michigan and moved to Petoskey, Michigan where he graduated from Petoskey High School. He married Laura Lynn Mclellan and together they had two sons, Ryan Paul Dyke and Alan Gregory Dyke. Their lives changed and Dan moved to Tulsa, Oklahoma and went to work for Nordam. Within a short time, he was hired as a Planner at Southwest United Industries and soon became their Quality Control Manager over seeing many projects, working on the International Space Station, the Space Shuttles and Air Force One to name a few. His love for Aviation was evident in everything and wanted to get his pilot’s license until detached retinas made him legally blind about 14 years ago. In 1989, he met the Love of his Life, Rosemarie Lee, and they were married September 29th, 1991. Throughout their marriage they loved to travel to many places and took no less than 4 Alaskan Cruises and several to the Caribbean. One of their favorite extended weekend getaways was Eureka Springs, Arkansas. He was also an avid fisherman and spent much time at Ft. Gibson on his pride and joy his Pontoon Boat. Dan’s favorite hobbies included woodworking and surprising others with his many talents. As a self-taught engineer, he loved sharing his knowledge with others and teaching his children and grandchildren what he learned. He loved to read and “Facts” mattered! His family was his life. After a long debilitating illness, Dan succumbed to Prostate Cancer, surrounded by his family on March 3, 2020 at the age of 62. He will be dearly missed by his wife, Rosemarie Dyke, Children; Ryan Paul Dyke and wife Kristina of Tulsa; Alan Gregory Dyke and his wife Alissa of Tulsa. His very special Grandchildren, Crystal Durocher, Devin Durocher, Aaron Dyke and Raegan Dyke, Brother, John Curtis Dyke of Washougal, Washington and Sister Roberta (Bobbie) Anne Gray-Elliott and husband David, of Tulsa and many nieces and nephews who loved him dearly. He was proceeded in death by his brothers, David Ralph Dyke and James Allen Dyke. A Memorial Service honoring Dan will be held 1:00 pm, Saturday, March 7th, 2020 at Hayhurst Funeral Chapel, 1660 S. Elm Place, Broken Arrow, Oklahoma 74012.

Daniel Mark Dyke was born in Detroit, Michigan on February 2, 1958. He was the last of 6 children born to Calvin Mark Dyke (deceased)and Elizabeth Marriane (Cannon) Dyke. (deceased). He grew up in Dearborn Heights, Michigan and moved to Petoskey,... View Obituary & Service Information

The family of Dan Dyke created this Life Tributes page to make it easy to share your memories.

Daniel Mark Dyke was born in Detroit, Michigan on February 2,...

Send flowers to the Dyke family.