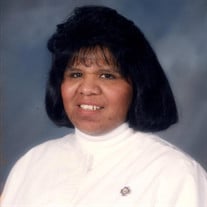 Cordelia Gail McHenry was born on Thursday, April 7, 1960 in Talihina, Oklahoma, the daughter of Isom and JoAnn (Muttuck) Thompson. She passed this life at the Claremore Indian Hospital on Tuesday, December 22, 2020. She was 60 years, 8 months... View Obituary & Service Information

Send flowers to the McHenry family.