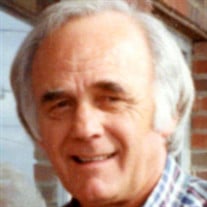 Clarence Ray Curtiss was born in Cushing, Oklahoma on Sunday, August 4, 1935 to Otto Donald Curtiss and Una (Gray) Curtiss. He passed from this life on Tuesday, May 4, 2021 in Tulsa, Oklahoma at the age of 85. Clarence was the youngest of four children born to Don and Una. His father worked construction and moved where the jobs were. He took a job in Tulsa and Una and her four children hitchhiked from Cushing to Tulsa when Clarence was only a small boy so that they could join her husband and unite the family together. Unfortunately, Clarence’s father passed away when he was only seven years old. Clarence attended schools in Tulsa. He suffered some health issues at a young age from both polio and rheumatic fever, but still graduated from Central High School in Tulsa in 1954. After school, he got a job with the Bank of Oklahoma in the Print Shop and began working his way up with BOK, eventually becoming an Assistant Vice President and the Purchasing Agent. His first marriage resulted in two children, a son and a daughter. After several years with BOK, the economy took a downturn and BOK was forced to lay off many of their workers. Clarence moved to Bakersfield, California in 1988 to work for the local Sizzler Steakhouse franchise owner as the Equipment Maintenance Manager. When his first marriage ended, he and former BOK coworker, Gail Young, were married in Bakersfield on December 12, 1990. Clarence continued to work for Sizzler until the franchise changed owners. He then took a job with the Home Depot in the Electrical Sales Department. He and Gail moved back to Tulsa in 2010 and he continued to work for the Home Depot in their downtown location until December of 2020 when he began to experience increasing health problems resulting from a diagnosis of covid pneumonia. Clarence was a quiet and private man who learned to love animals and long evening walks with Gail. He loved to watch wrestling, old westerns, Clint Eastwood movies, Pawn Stars, and Storage Wars. He disliked many green vegetables but on occasion, enjoyed fried catfish or grilled shrimp tacos as well as Mexican food or a good hamburger and fries. He also loved the occasional slice of pie brought to him by Margaret of Home Depot. He had many friendships with his Home Depot coworkers and customers, both in Bakersfield and Tulsa. He loved life in Bakersfield and then Tulsa again when he returned here for his remaining years. He will be remembered as a hardworking man who was always there to support his family. He will be missed by all who knew and loved him. In lieu of flowers, please make a donation to your favorite animal charity. This would please Clarence. He is survived by his wife, Gail of their home in Tulsa Son, Tom Curtiss (Marsha) of Tulsa Daughter, Tammy Curtiss Lyda (Allen) of Newport Beach, California Brother, G.W. “Bud” Curtiss (Charlotte) of Claremore Sister, Leona Keeter of Tulsa 3 Grandchildren: Brandon Curtiss (Chrystle), Rikki Curtiss Fjeldsted, and Tiffany Lyda Kirschenbaum (Seth) 4 Great Grandchildren: Parker, Braydon, Bronson, and Brantlee He was preceded in death by his parents, and a brother Donald Curtiss

Clarence Ray Curtiss was born in Cushing, Oklahoma on Sunday, August 4, 1935 to Otto Donald Curtiss and Una (Gray) Curtiss. He passed from this life on Tuesday, May 4, 2021 in Tulsa, Oklahoma at the age of 85. Clarence was the youngest of four... View Obituary & Service Information

The family of Clarence Curtiss created this Life Tributes page to make it easy to share your memories.

Clarence Ray Curtiss was born in Cushing, Oklahoma on Sunday,...

Send flowers to the Curtiss family.