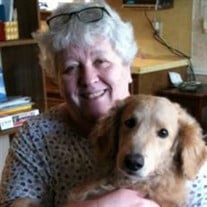 Cathryn Sue (Weiderman) Turnham was born in Rochester, New York on Thursday, April 10, 1947, to Robert and Florence (Gelder) Weiderman. She passed from this life on Thursday, January 20, 2022 at the age of 74. Cathy was a long-time resident of Broken Arrow, Oklahoma. Cathy was the oldest of four children born to Robert and Florence. After graduating from Rush-Henrietta High School in Henrietta, New York, she enrolled in the Highland Hospital School of Nursing and received her certification as a Registered Nurse. After this, she enlisted in the U.S. Navy and served active duty for two years. She made lifelong friends during this time, and met Michael David Turnham while at Camp Lejeune, North Carolina. After their time in the Navy was completed, they moved to Michael’s hometown of Tulsa, Oklahoma and married on September 25, 1971. They became the parents of two children. The Turnham family was active at Arrow Heights Baptist Church in Broken Arrow for many years. They served as a foster family for many newborns through the Owasso Baptist Homes for Children for ten years, providing care and love for these precious children until they were placed with their adoptive families. Cathy and Michael also hosted and taught a Bible Study in their home. Cathy enjoyed cross stitch, quilting, and other crafts in her free time after she retired from her 40-year nursing career. She also had a great companion in her Labradoodle “Chewie”. She was known for her generosity to friends and family, and will be missed by all who knew and loved her. Left to cherish her memory are daughter, Rachel Green (Jeremy) of Norman Son, Zack Turnham (Ginny) of Broken Arrow Grandchildren: Katie Tousignant, and Caleb Tousignant Those who preceded her in death are her parents: Robert and Florence; Husband: Michael; Sister: Carol Young; and Brothers: John Weiderman and Jim Weiderman. In lieu of flowers, Cathy's family requests donations be made in Cathy's name to: The Journey Home 900 Washington Blvd. Bartlesville, OK 74006 www.thejourneyhome.org/donate

Cathryn Sue (Weiderman) Turnham was born in Rochester, New York on Thursday, April 10, 1947, to Robert and Florence (Gelder) Weiderman. She passed from this life on Thursday, January 20, 2022 at the age of 74. Cathy was a long-time resident... View Obituary & Service Information

Send flowers to the Turnham family.