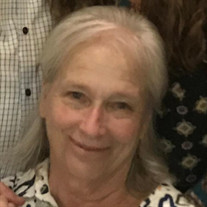 Cathy Gareis, 73, passed away on February 17, 2021 after a short but courageous battle with cancer. Cathy was born on October 27, 1947 in Hamilton, Ohio to Joe and Kay Beimford. Cathy and her family moved to Colorado in 1953. She graduated in 1965 from George Washington High School. She went on to Colorado State University. It was there, while earning her Bachelor of Arts in History that she met her handsome husband. Cathy spent her early working career in education sharing her passion for history. She later worked at Mountain Bell, Dr. Owens and Tulsa Bone and Joint. She was a respected employee with an admirable work ethic. In her free time, she enjoyed spending time with her family and friends. She was a cross word puzzle expert. You could always find her in the stands or on the sidelines supporting her grandchildren. She had a way of turning her friends into honorary family, including the women she’s played bunco with for over 30 years and the pizza and bagel friends. She was proud of her Catholic faith and involved in several bible study groups. She and her family joined the Church of Saint Benedict’s when they moved to Tulsa in 1987. She was a faithful parishioner from the first day they attended. She really missed attending mass in person during the COVID pandemic. Cathy is survived and celebrated by her son Scott and his wife Julie; daughter Sarah and her husband Kevin; four adored grandchildren Abram, Alexis, Reese & Finn; brother Pat Beimford; brother Jim Beimford and his wife Kathy; as well as her beloved nieces and nephews Lisa, Marcy, Erin, Michael, and Joseph. She is preceded in death by the love of her life, Bernie and her parents Joe and Kay Beimford. There will be a Rosary Service on Tuesday, February 23rd at 6:30 pm and a Funeral Mass on Wednesday, February 24th at 10:00 am. Both services will be at the Church of Saint Benedicts and will offer a live streamed option. In lieu of flowers the family requests donations be made to: Catholic Charities 2450 N. Harvard Ave Tulsa, OK 74115 www.cceok.org

Cathy Gareis, 73, passed away on February 17, 2021 after a short but courageous battle with cancer. Cathy was born on October 27, 1947 in Hamilton, Ohio to Joe and Kay Beimford. Cathy and her family moved to Colorado in 1953. She graduated... View Obituary & Service Information

The family of Cathy Ann Gareis created this Life Tributes page to make it easy to share your memories.

Send flowers to the Gareis family.