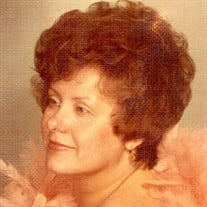 Carol Ann Wells was born in Enid, Oklahoma on Friday, August 20, 1943 one of four girls to Earl Lee and Anita Jane (Pittman) Henderson. She passed from this life on Thursday, October 8, 2020 surrounded by family at her home in Broken Arrow. Her family moved around as her father was in the military, but she graduated from Tulsa Central High School in 1959. She met the love of her life in Sanford Wayne Wells and after dating for awhile they married on December 18, 1961 in Tulsa. She was a stay at home mom and enjoyed raising her three daughters. Carol was the type of mom that they could bring their friends home to and any teenager who needed a meal or a place to stay was welcome in their home. She loved to cook and was an avid bird watcher. An active member of the Eastern Star for many years, Carol was also a member of Beta Sigma Phi, First United Methodist Church of Broken Arrow, and a proud Republican. You could often find her volunteering for different causes either at church or in the community. She was “Granny” to her grandchildren and always told her family “I love you.” She was a beautiful lady, both inside and out and will be missed by many. In lieu of flowers, please consider a donation to Broken Arrow Neighbors at 315 West College Street, Broken Arrow, OK 74012 or to John 3:16 Mission at 506 N. Cheyenne Avenue, Tulsa, OK 74103 Carol is survived by: Sister, Linda Hersh and her husband, Ivan Sister, Anita Hamblin Sister, Michele Hamblin Daughter, Patricia Marchand and her husband, Jay of Bentonville, Arkansas Daughter, Kathleen Wells of Broken Arrow Daughter, Rebecca Robertson and her husband, Robert of Broken Arrow Grandchildren: Nicholas Robertson, Eric Robertson, Matt Parson, Scott Marchand, Heather Stallard, and Lily Stallard And one Great-granddaughter, Scarlett She was preceded in death by her parents: Earl and Anita Henderson, and her husband, Sanford Wells

Carol Ann Wells was born in Enid, Oklahoma on Friday, August 20, 1943 one of four girls to Earl Lee and Anita Jane (Pittman) Henderson. She passed from this life on Thursday, October 8, 2020 surrounded by family at her home in Broken Arrow.... View Obituary & Service Information

The family of Carol Wells created this Life Tributes page to make it easy to share your memories.

Send flowers to the Wells family.