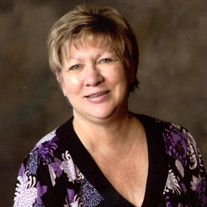 Carolyn Ruth Smith was born October 3, 1958 in Broken Arrow, Oklahoma to Robert and Ruth Ann (Adney) Cosby. She entered those ‘Pearly Gates’ on Tuesday, August 17, 2021 from Tulsa, Oklahoma at the age of 62. Services are under the direction of Hayhurst Funeral Home. Carolyn was endearingly shortened to Carol. She was a 1976 Broken Arrow graduate. She furthered her education by obtaining an associate’s degree. She was employed at the Center for Employment Opportunities as a Case Manager. She enjoyed her work and was always there with a helping hand. Carol met Allen Smith and they were married in Tulsa, Oklahoma on September 22, 1992. She adored her husband and family. Going to family events was one of the ways she liked to spend her time, but her favorite family event was going to church together. Carol’s hobbies included planting flowers and gardening, as well as fishing. She cheered for the OU football team and took joy in watching western movies. In lieu of flowers the family requests donations to www.stjude.org/donate Carol is survived by, Husband, Allen Smith of Broken Arrow, Oklahoma Daughter, Andrea Rook & Chad of Catoosa, Oklahoma Son, David McKay of Catoosa, Oklahoma Daughter, Shelby Smith of Tulsa, Oklahoma Daughter, Katy Stewart of Catoosa, Oklahoma Grandchildren, Gabriel White, Jordyn McKay, Sheldon Smith, Kaydence Smith, Jace Stewart, Chevelle Fulerton, Ellie Fullerton Sisters, Laura Cosby, Peggy Payne & Jim, Robin Sutton & Eric, Kelli Rankin Preceded in death by parents.

Send flowers to the Smith family.