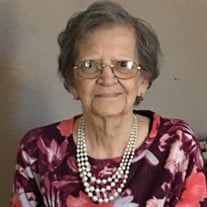 Carmella Gaynor was born in New York City, New York on Friday, February 27, 1931 one of four children to Mario and Rosina (Darminio) Pastorino. She passed from this life on Wednesday, August 19, 2020 in Broken Arrow. Her grandparents immigrated to Ellis Island from Italy. Though she was born during the Great Depression her family was extremely close. One time her sister asked her if they were poor and she replied, “isn’t everybody?” She did not own a refrigerator until she was 18 years of age. After High School Carmella went to work for Blue Cross/Blue Shield in New York and met the love of her life, John Gaynor. The two dated for some time and then married in May 1957. They raised three sons and four daughters. They moved to Broken Arrow in the 1970’s. John died in 1985 and Carmella stayed single the remainder of her life. The family enjoyed going to the beach and she taught all her children how to cook authentic Italian food, but she was the best cook around. Some of her family’s favorites that she made were lasagna, manicotti, and eggplant parmesan. She enjoyed reading, crocheting, and going to the grandkids’ activities. She was an active member of St. Anne’s Catholic Church until her health began to fail. Carmella is survived by: Son, Chris Gaynor of New York Son, Brian Gaynor and his wife, Patty of Broken Arrow Daughter, Linda Fesperman and her husband, Chris of Coweta Daughter, Laurie Gaynor of Broken Arrow Daughter, Lynne Barneck of Broken Arrow Grandchildren: Cherish Gaynor, Amber Gaynor, John Gaynor, Christina Gaynor, Mary Wortz, Tina Morrison, Brittney Barneck, Matthew O’Dell, David O’Dell, Cassidy Fesperman and Victoria Fesperman, and 12 Great Grandchildren As well as numerous nieces and nephews She was preceded in death by her parents: Mario and Rosina Pastorino, her husband: John Gaynor; two brothers: Michael and Phil ; one sister: Rae; one son: Gary and a daughter: Jeannie

Carmella Gaynor was born in New York City, New York on Friday, February 27, 1931 one of four children to Mario and Rosina (Darminio) Pastorino. She passed from this life on Wednesday, August 19, 2020 in Broken Arrow. Her grandparents immigrated... View Obituary & Service Information

Send flowers to the Gaynor family.