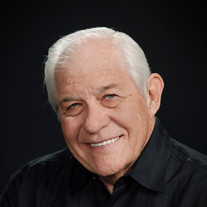 Carl Williams was born on Wednesday, February 15, 1939 in Oklahoma City, Oklahoma the son of Frank and Bertha (Geren) Williams. He passed this life at his home in Broken Arrow on Saturday, May 1, 2021 with his beloved wife, Sally holding his hand. He was 82 years of age. Carl Williams was a 1957 graduate of McAlester, Oklahoma high school. He received his degree in Drafting from Oklahoma State University in Okmulgee and following graduation was employed by Braden Steel in the Drafting Department. During his 24 years at Braden Carl worked his way up to National Sales Account Manager, traveling across the United States selling and constructing metal buildings. When Braden moved operations to Houston Carl chose not to leave the Tulsa area and resigned. Carl became Vice President for the Oklahoma branch of an Arkansas based general contracting firm, Structural Systems Incorporated, SSI. During his 9 years at SSI Carl was involved with Associated Builders & Contractor (ABC) and served as Chairman of the Board in 1989. In 1993 ABC hired Carl as President and CEO and he asked Sally Singer to work there with him. Carl and Sally were married on May 8, 1999, becoming partners in life. All that knew them had no question that they were truly best friends. They helped grow the Oklahoma ABC Chapter, provide it a debt free facility, and worked to support the commercial construction industry and the Merit Shop. During his tenure with ABC Carl was extremely proud of his efforts to make Oklahoma a Right to Work state and lead ABC’s involvement with the Folds of Honor. Carl was a patriot, a freedom fighter and a flag waver. Carl enjoyed his work, traveling and fly fishing. He was a Corvette enthusiast, owning red convertible corvettes for the past 20 years. His greatest love was his family, spending time with Sally, his children, grandchildren and great grandchildren. The family request memorials to Folds of Honor at foldsofhonor.org. Carl is survived by, Wife, Sally Singer Williams, of the home Children, Carla and husband Keith Carter, Hominy, OK Becky Taylor, Tulsa, OK John and wife Kali Singer, Claremore, OK Grandchildren, Justin and Elise Dobbins, Sarah and Jason Willhite, Morgan and Tyler Mitchell, Adam Williams, CJ and Ryan Kendrick, J.D. Singer, Matthew Singer and Molly Singer And 5 Great Grandchildren, Josh and Jase Willhite, Paili and Skylar Dobbins and Maddux Mitchell He was preceded in death by his parents, Frank and Bertha Williams, a son, Chris Williams and two brothers, Glenn Williams and Don Williams.

Carl Williams was born on Wednesday, February 15, 1939 in Oklahoma City, Oklahoma the son of Frank and Bertha (Geren) Williams. He passed this life at his home in Broken Arrow on Saturday, May 1, 2021 with his beloved wife, Sally holding his... View Obituary & Service Information