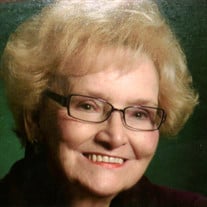 Bonnie was born on Tuesday, December 18, 1923 in Siloam Springs, Arkansas to William Joseph and Lizzie Lenora (Carnes) Brooks. She passed from this life to her eternal home in heaven on Friday, March 12, 2021 in Broken Arrow, Oklahoma at the age of 97. She was the next to the youngest of six children, with three sisters and two brothers. She and her siblings were always close, constantly playing pranks on one another. Later in life, Bonnie loved to get together with her sisters and laugh and talk the night away. The family moved from Siloam Springs to Bristow while she was in her mid-teens. As an 18 year old high school girl, she told her parents that she was going to Tulsa with a girlfriend to spend the night with one of her older brothers. Somehow, the two girls found themselves at Cain’s Ballroom for a Bob Wills Concert. There, she met the love of her life, Julian “Doc” Owen. The two of them danced throughout the evening and then when he did take her to her brother’s home they stayed out in the car and talked all night. They married less than a year later on January 16, 1942 and were happily married for 58 years until Doc’s death in 2000. Bonnie and Doc made their home in Broken Arrow and raised their family there. She loved being a mom and staying home with the children, however, she took a job outside of the home as the Office Manager/Clerk for the Broken Arrow Health Center for many years. She made lots of friends in the position who were quite fond of her. She was a long-time member of the Business and Professional Women’s Association in Broken Arrow and she and Doc joined Arrow Heights Baptist Church in 1957. Her hobbies include writing poetry, working sudoku and word search puzzles, and she followed any team with Oklahoma in its name. She was especially fond of the Oklahoma City Thunder. She also loved to travel, making lots of vacation trips around the country to different states through the years. Some of the words her family used to describe her were perfect, selfless, nurturing, and fun-loving. She inspired total devotion in everyone she met. She loved jokes but had a hard time remembering the punch lines for most of them. Bonnie will be missed by all who knew and loved her. She is survived by: Daughter, Joyce Angieri (Phil) of Broken Arrow Son, David Owen (Jacqueline) of Broken Arrow 4 Grandchildren, Lori (Mitch), Mark (Jananne), Jonathan and Joshua 1 Step-grandchild, Manse (Jeri) 5 Great Grandchildren, Aaron, Kailey, Whitney, Taylor and Hunter And 3 Great, Great Grandchildren, Riley, Blakeley and Crew She was preceded in death by her parents, William and Lizzie Brooks, her husband, Julian “Doc” Owen, two brothers, Perry Brooks and Swimmer Brooks, and three sisters, Chloe Engle, Mary Singleton and Wanda Shrum, and one step son, Jerry Mouser (Judi)

Bonnie was born on Tuesday, December 18, 1923 in Siloam Springs, Arkansas to William Joseph and Lizzie Lenora (Carnes) Brooks. She passed from this life to her eternal home in heaven on Friday, March 12, 2021 in Broken Arrow, Oklahoma at the... View Obituary & Service Information

The family of Bonnie Lou Owen created this Life Tributes page to make it easy to share your memories.

Send flowers to the Owen family.