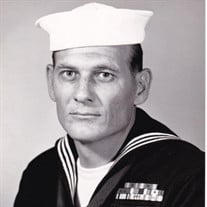 Billy Joe Hollomon was born in Ada, Oklahoma on Wednesday, June 17, 1936, to Farley Johnson and Delsie Mae (Gunnels) Hollomon. He passed from this life on Wednesday, July 14, 2021, in Tulsa, Oklahoma at the age of 85. Billy was the 2nd oldest of seven children born to the Hollomon’s. His father worked in construction and his mother was a waitress. The children grew up very close and during hard times Bill worked hard to keep his brothers and sisters together and out of foster homes. He attended school in the Ada area. In Roswell, New Mexico at 16 years of age Bill joined the United States Army where he served two years in Germany from 1953-1955 during the end of the Korean War. After that two-year stint, he joined the United States Navy from 1956-1974, completing 20 years in the armed services, he retired as a First Class Petty Officer. He was honored with several awards for his service both in Korea and Vietnam. During one time in the service when Bill was home on leave his brother Doug wanted to hear him sing and introduced Bill to Rosemary Charvoz who owned a guitar, and the two met and fell in love. They married on October 30, 1958, in Roswell, New Mexico. They eventually became the parents of two sons, Billy and Eddie, and one daughter, Kristin. Later, they also raised two of their grandchildren Justin and Kacy. Bill and Rosemary were married for 62 years. One to never stand still, for a few years when they were stationed in Yuma, Arizona he became a volunteer law enforcement officer for the Arizona Rangers. He was always good with his hands and was skilled in leather tooling. But his true love was playing the guitar and singing country/western music. After retiring from the Navy in 1974 the family moved to Tulsa, Oklahoma where Bill started his career in manufacturing management. Throughout his time in the Navy, and while in Tulsa, Billy played in several bands, but frequented the Turley Round Up Club for nearly two decades playing and singing with the Southern Yankee Band. Billy also enjoyed playing golf and having family card games on weekends. His children used words to describe their father like strong, humble, dependable, a rock, and devoted family man. He was also quite the jokester and his laugh was both contagious and unforgettable, but he also had a serious side. You could always see him in his cowboy boots and hat, he will be missed by all who knew and loved him. Left to treasure his memory are his wife, Rosemary of the home in Broken Arrow Son, Billy D. Hollomon and his wife, Charlotte, of Owasso Son, Thomas E. Hollomon and his wife, Denise, of Hampton, Virginia Daughter, Kristin L. Kieffer of Tulsa 6 Grandchildren: Adriann, Justin, Dana, Kacy, Andrew and Spencer And 6 Great Grandchildren: Cameron, Abigail, Britain, Keelan, Bryson and Zane. Brother, Jerry Hollomon and his wife, Linda, of Tulsa. Those who preceded Billy in death are his parents and brothers, Doug, Ed, and Tom and sisters, Judy and Delores.

Billy Joe Hollomon was born in Ada, Oklahoma on Wednesday, June 17, 1936, to Farley Johnson and Delsie Mae (Gunnels) Hollomon. He passed from this life on Wednesday, July 14, 2021, in Tulsa, Oklahoma at the age of 85. Billy was the 2nd oldest... View Obituary & Service Information

The family of Billy J Hollomon created this Life Tributes page to make it easy to share your memories.

Send flowers to the Hollomon family.