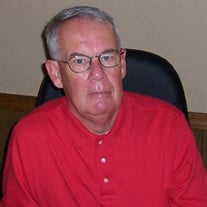 William Franklin “Bill” Robb was born on Saturday, December 6, 1941 in Dallas, Texas. He was one of two sons born to John and Geraldine (Ard) Robb. He passed from this life on Saturday, November 28, 2020 at his home in Broken Arrow, Oklahoma at the age of 78. He and his brother grew up in Dallas to two working parents and had a great childhood. His mom worked at Nieman Marcus and his dad sold farm equipment. Their ability in sales was surely passed down to Bill and used throughout his entire life. After high school, he enrolled at Texas Tech University in Lubbock, Texas and graduated from there earning his bachelor’s degree four years later. After graduation, he joined the U.S. Army where he was stationed in Germany during the Viet Nam era. After returning to the states he began a career in sales and while in Tulsa met a young lady during the opening of a new Target store where she was a manager. It would take a few dates and some time would pass but eventually he would win her heart and he and Judy married on June 26, 1971 in Oklahoma City where they lived for a few years before making their permanent home in Broken Arrow. Bill spent the early part of his career as a traveling salesman but in the early 1980’s he grew tired of the road and decided to apply himself and studied to become a financial advisor, which he was very successful at for the last thirty years of his working life, retiring in 2014. He won many awards and trips. He and Judy loved to travel and were able to visit many of the places they had dreamed of during their 49 years of marriage together. He was an avid golfer and was on the board when Battle Creek Golf Club began, a member of Indian Springs Country Club and Forest Ridge Golf Club for many years since its founding. Bill was an active member of St. Patrick’s Episcopal Church in Broken Arrow and shared many cups of coffee over the years with Father Shelby Scott “mansplaining” the mysteries of life together. He was also a long-time member of the Broken Arrow Civitan Club. He was very gregarious and could talk your arm off! He loved to joke around and tease his family members who will miss him dearly. Bill is survived by, His wife, Judy, of the home Son, Will and his wife April, of Oklahoma City 2 Granddaughters: Callie and Hetty Sister-in-Law: Maryellen and Brother-in-Law: Mike of Wilburton And numerous nieces, nephews, cousins and friends. He was preceded in death by his parents: John and Geraldine Robb and brother: Jim Robb Virtual coverage of the funeral service for Bill Robb can be seen at Facebook Live at 2:00pm Friday afternoon. Please go to the church's Facebook page at: https://nam12.safelinks.protection.outlook.com/?url=https%3A%2F%2Fwww.facebook.com%2Fstpatsba%2Flive%2F&data=04%7C01%7C%7Ce17ee3c542844a2a9f5508d897fbd919%7C84df9e7fe9f640afb435aaaaaaaaaaaa%7C1%7C0%7C637426455221390114%7CUnknown%7CTWFpbGZsb3d8eyJWIjoiMC4wLjAwMDAiLCJQIjoiV2luMzIiLCJBTiI6Ik1haWwiLCJXVCI6Mn0%3D%7C1000&sdata=%2FFabcOWxZWhV3%2By32z0x5bKrS4WE19eTMUhE7B5vQPw%3D&reserved=0 https://www.facebook.com/stpatsba/live/ If you join in online, please enter your name into the comments or else e-mail [email protected] in order that we can provide the family with a list, or virtual guestbook, of those who shared this time with them.

Virtual coverage of the funeral service for Bill Robb can be seen at Facebook Live at 2:00pm Friday afternoon. The bulletin can be found here. If

Send flowers to the Robb family.