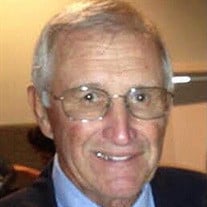 Ernie William “Bill” Lemon, Jr. was born on February 28, 1937, at the family home on South Cedar in Broken Arrow, Oklahoma. He passed away on Sunday, July 4, 2021, at the age of 84. Services will be under the direction of Hayhurst Funeral Home. Bill attended Broken Arrow schools and was a Tiger through and through. He loved sports and played basketball, baseball, and football. Most notably, Bill was quarterback for the 1954 undefeated Tiger football team and was inducted into the Broken Arrow Athletic Hall of Fame in 2007 for his athletic accomplishments. A dedicated Tiger fan, Bill consistently attended basketball and football games; he had season tickets for over 60 years. After completing high school, Bill continued his education at Northeastern State University where he graduated with a business degree. In 1960, Bill married his high school sweetheart, Linda Lea, and they were blessed with one daughter, Jodie Lemon Owens. Bill worked at the Broken Arrow Post Office for 26 years and retired as assistant postmaster in 1986. After retiring from the postal service, he worked several years at Loman Sand in Bixby, Oklahoma. Bill loved to play golf, fish, and reminisce with his classmates. He also had a creative vision for making projects out of wood, rocks, and other materials; he was a skilled craftsman. Survivors include: Wife, Linda of Broken Arrow Daughter, Jodie Owens and her husband, Jim of Broken Arrow Grand Daughter, Dr. Ashlea Wulf and her husband Justin, of Broken Arrow Grand Daughter, Amy Owens, of Tulsa Great Grandson, Thomas James Wulf of Broken Arrow Brother, Bob Lemon and his wife Sue of Broken Arrow Brother, Larry Lemon and his wife Cindy of Brighton, Colorado Many nieces and nephews He was preceded in death by an infant daughter, Judy Lemon and his parents, Ernie and Etheline “Biddie” Lemon In lieu of flowers, memorials may be made to: Broken Arrow Community Foundation, Inc., Joe Robinson Scholarship Fund, 2720 N. Hemlock Court, Ste. B, Broken Arrow, OK 74012

The family of Bill Lemon created this Life Tributes page to make it easy to share your memories.

Send flowers to the Lemon family.