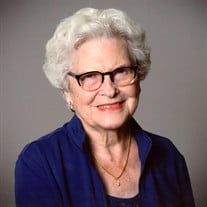 Betty Ruth Beachler was born August 30, 1926, to Roscoe and Leona Payne Beachler in a small hospital in Fairbury, Nebraska. She was the youngest of eight children and always felt blessed to have a big, loving family. Her parents and both sets of grandparents all belonged to the Methodist Episcopal Church, which was the center of family worship and social life in general. Music was always a big part of her life, and she started playing the piano for church and singing in the choir when she was 12 years old. She also sang for many weddings and funerals. She passed from her journey through life at her home on July 28, 2020, peacefully in her sleep. Betty graduated from Reynolds High School, in Reynolds, Nebraska, in 1943, and attended the University of Nebraska. Later in life she attended night school and took correspondence courses, majoring in Accounting and Business Law. This enabled her to start her own business in Real Estate and Insurance. She continued to work in this field until she retired in 1992. The impetus of her life was always her children. She often said that she believed in the religion of “love”, and she quoted the scripture “God is love. Whoever lives in love, lives in God, and God in him.” Her spirit of love will be greatly missed by all those who loved her. Her parents and all of her brothers and sisters, and their spouses preceded her in death. She was also preceded by her son-in-law, Larry Anderson, one grandson, Michael Anderson, and one step-grandson, Ben Johnson. She is survived by her daughter, Kaye Anderson of Buckeye, Arizona, son, Gale Stark and wife, Janet, of Peggs, Oklahoma, and son, Gary Stark and wife, Marsha, of Broken Arrow, Oklahoma. She also leaves behind her granddaughter, Kimberly Anderson of Gilbert, Arizona, grandson Jesse Stark of Locust Grove, Oklahoma, grandson Jared Stark and wife, Charla, of York, Nebraska, grandson William (Billy) Stark of Broken Arrow, Oklahoma, and granddaughter Shannon Stark Guss and husband, Alex, of Aurora, Colorado. Her extended family includes eleven great-grandchildren, six step -grandchildren and their spouses, and 14 step-great grandchildren. She also loved and cherished many nieces and nephews.

Betty Ruth Beachler was born August 30, 1926, to Roscoe and Leona Payne Beachler in a small hospital in Fairbury, Nebraska. She was the youngest of eight children and always felt blessed to have a big, loving family. Her parents and both sets... View Obituary & Service Information

Send flowers to the Wells family.