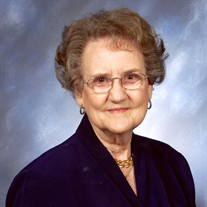 Betty Jean (Hawkins) Rhea was born on Monday, October 10, 1927 to Byrd Raymond and Bessie Rae (Barbee) Hawkins in Floydata, Texas. She passed on Wednesday, December 16, 2020 in Broken Arrow, Oklahoma. Services are under the direction of Hayhurst Funeral Home in the Chapel, Wednesday December 23, 2020 at 2:00pm. Betty graduated from Limestone Gap high school in 1945. She grew up in Wardville and was best friends with Gwen Rhea. They spent many hours swimming in the pond during the summer months, batting snakes away when they got too close. Gwen happened to have an older brother, Felmet. When Felmet returned from the service in 1944, his little sister’s best friend piqued his interest, and the romance began. She married her best friend’s brother on October 19, 1945 in McAlester Oklahoma and they started their family. The family grew to include three children, eight grandchildren and ten great grandchildren. Betty was a wonderful homemaker, often making clothes for her daughters and draperies for the home, then continuing to make clothes for her grandchildren. She was a secretary for many different companies, including Tulsa University, OSU Extension Center, Oklahoma Osteopathic College, ending with Occidental Petroleum. She was most proud of her work at Oklahoma Osteopathic College where she developed and deployed their Word Processing Department. She was a faithful member of the First Baptist Church in Broken Arrow and participated in their Seniors Choir for many years. She was a member of the Lydia Ladies Sunday School Class. She was also an avid sports fan and enjoyed basketball (having played in High School) and football. Her favorite teams were the OKC Thunder and the Dallas Cowboys. Betty liked to play Bridge, she started a club at Silver Arrow Estates in Broken Arrow, and was a regular or alternate in a couple of clubs. She also liked to spend time tending her gardens. Most of all, in life, she loved her family. She stayed in touch with extended family, imported out of state grandchildren, and picked up in-state grandchildren from school on many occasions. She loved with food, often hosting family functions, and making sure everyone had plenty to eat of their favorite foods and desserts. Breakfasts with biscuits and gravy, and holiday dinners with ham balls were common requests. Her final days were no different, from her bed she continued directing her family to “go get something to eat”. Betty is survived by Son, Jerry Rhea & wife; Nancy of Broken Arrow, Oklahoma Daughters, Charlotte Rhea of Broken Arrow, Oklahoma Priscilla Dougherty & husband; John of Collinsville, Oklahoma Grandchildren, Heather Clevinger & husband; Shawn, Valerie Hilliard and husband Justin,Jeff Rhea and wife Audrie,Curtis Rhea, Patrick Clark, Pascalle Clark, and Johnny Dougherty Great-Grandchildren, Brayden Clevinger, Savannah Clevinger, Liliana Clevinger, Isabelle Clevinger, Zayne Hilliard, Abrielle Hilliard, Titus Hilliard, Aidyn Rhea, William Rhea, Tristin Coyle Preceded in death by husband, Felmet, brother, Jerry Hawkins and grandson, Andrew Dougherty

Betty Jean (Hawkins) Rhea was born on Monday, October 10, 1927 to Byrd Raymond and Bessie Rae (Barbee) Hawkins in Floydata, Texas. She passed on Wednesday, December 16, 2020 in Broken Arrow, Oklahoma. Services are under the direction of Hayhurst... View Obituary & Service Information

Send flowers to the Rhea family.