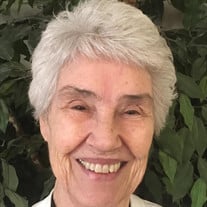 Bernice Masterson was born in Porter, Oklahoma on Saturday, November 28, 1931, to LeRoy and Lois (Cagle) Masterson. She passed from this life to her eternal home in heaven on Monday, October 11, 2021, in Broken Arrow, Oklahoma at the age of 89. Bernice was one of three children born to LeRoy and Lois. Bernice met Jim, the love of her life, attending Union High School in Tulsa. After graduation in 1949, the two were married on October 25, 1949, in Tulsa. Jim worked for Sipes Grocery Store, and she worked as a waitress. In 1957 the couple moved to Springfield, Missouri where Jim attended and graduated from Bible Baptist College in 1961. After graduation, they moved to Broken Arrow, Oklahoma where they ministered together for 57 years, 17 of those years at Bible Baptist Church. You could often find her teaching Sunday School Classes or Vacation Bible School. They purchased Green Country Trash Service working together on the trash route, as well as taking care of all the office responsibilities. Bernice also served as a volunteer for the Election Board but especially loved spending time with her children, grandchildren, and greats. She loved attending her grandkids’ sporting events. Bernice was a wonderful cook and enjoyed preparing family holiday meals. They retired to their Fort Gibson Lake home where many cherished memories were made. Bernice was the Godly example of a servant’s heart with a radiant smile. After Jim’s passing and Bernice moved into Senior Living, she enjoyed many activities including Bean Bag Baseball, Badminton, Bowling, Crafts and Painting. She loved going to Gospel Music Concerts, and her monthly spa days where she would get both a manicure and pedicure. After her weekly hair appointment, she often had lunch at one of her favorite restaurants such as Ron’s Hamburgers & Chili or Ted’s Café Escondido. She will be missed by all who knew and loved her. Left to cherish her memory are daughter Brenda Joyce Beall (Kenneth) of Broken Arrow Daughter Terri Trogdon of Broken Arrow Son James “Doug” Gaylor of Wagoner 6 Grandchildren: Chad and Carlye Trogdon of Edmond Kendra and Joel Wiland of Broken Arrow Brandi and Quinn Kroth of Purcell Jarrett and Melissa Beall of Broken Arrow Mandy and Brett Cole of Broken Arrow Kara and Jeremy Popkess of Broken Arrow 12 Great Grandchildren: Amanda Root, Landon Wiland (Kara), Christopher Wiland, Baylee Cole (Keifer), Kody Kroth, Madison Beall, Elizabeth Beall, Maci Cole, Presley Cole, Piper Cole, Poppy Popkess and Jackson Popkess 4 Great Great Grandchildren: Alexis, Charlie, John, and Ben And numerous nieces, nephews, and cousins Those who preceded her in death are the love of her life James, her parents, LeRoy and Lois Masterson, brother, Roy Gene Masterson and sister, Ruby Jo Ross

Bernice Masterson was born in Porter, Oklahoma on Saturday, November 28, 1931, to LeRoy and Lois (Cagle) Masterson. She passed from this life to her eternal home in heaven on Monday, October 11, 2021, in Broken Arrow, Oklahoma at the age of... View Obituary & Service Information

Bernice Masterson was born in Porter, Oklahoma on Saturday, November...

Send flowers to the Gaylor family.