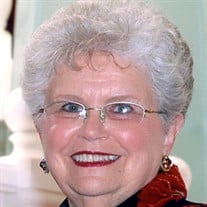 Barbara Frances (Gilmore) Moore was born in Wagoner, Oklahoma on October 11th, 1933 to William F. Gilmore, Sr., and Thelma Moselle (Scott) Gilmore. She passed away to her heavenly home on April 16th, 2021. Barbara was the oldest of four children who helped with the care of her younger siblings. Her only brother, William F. Gilmore, Jr., tragically passed away while serving his country in Vietnam. She is survived by her sisters Mary Ellen Overton and Madeline Gilmore. Barbara married Clarence Cooper after high school and the couple was blessed with four sons: David, Kenny, Mike, and Jeff. She was a wonderful mother who taught her sons about God and was well-known for being an excellent cook. Barbara was always attending her sons’ school activities and ballgames and was also involved in the Parent Teacher Association and served as a Sunday School teacher. Barbara continued this tradition with her grandchildren as she regularly attended their school activities and ballgames. Barbara was a faithful employee of Springer Clinic, where she held an office position for many years. She enjoyed her job and the people she worked with. In 1976, Barbara married Harold Lloyd Moore, the love of her life. They made their home in Broken Arrow and enjoyed 45 years of marriage until his recent passing in February of 2021. Through this union, she was also blessed to have Karen as her step-daughter. Barbara and Harold loved making their house into a home where they regularly hosted family gatherings complete with special meals and a level of hospitality only Barbara could provide. They enjoyed gardening and planting flowers and always had a beautiful yard. Their home never ceased to be a welcoming place for family and friends. Barbara and Harold were members of the Northside Christian Church in Broken Arrow, Oklahoma. Barbara is survived by sons David Cooper and wife Lorrie, Kenneth Cooper and wife Barbara, Michael Cooper and wife Jill, and Jeffrey Cooper; step-daughter Karen Hutson and husband Bruce; grandchildren Keith, Ryan and wife Tiffani, Kelly and wife Aimee, Mike and wife Kristyn, Angie, Jeffrey, Scott, Brent Hutson, and Bryan Hutson; eleven great-grandchildren; sisters Mary Ellen Overton and Madeline Gilmore; niece Dr. Malinda Overton Webb; nephew Myron Overton, and special family friend Dr. Nilda Reyes. Barbara was preceded in death by her husband, parents, brother, daughter-in-law, Susan Jane Cooper, and grandson, Dustin Cooper. Special thanks to The Parke Assisted Living staff and Rivercross Hospice

Barbara Frances (Gilmore) Moore was born in Wagoner, Oklahoma on October 11th, 1933 to William F. Gilmore, Sr., and Thelma Moselle (Scott) Gilmore. She passed away to her heavenly home on April 16th, 2021. Barbara was the oldest of four children... View Obituary & Service Information

Send flowers to the Moore family.