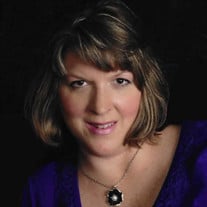 Angela Dawn Carter was born on February 18, 1968 in Clinton, Oklahoma to Donald G. and Carolyn (Winslow) Carney. She passed from here to eternity on Friday, March 19th at 53 years of age. Angela graduated from Northwest Classen High School in 1986 and continued her education to obtain a Bachelors Degree from Oklahoma Baptist University in 1993. Most recently she worked as a Provider Services Representative for Blue Cross and Blue Shield. There was no end to the joy she provided, but her most ardent passion was reaching beyond herself to help others. Angela was a phenomenal wife, daughter, sister, aunt, mother, stepmother and friend. Her zeal for singing, cooking, gardening, decorating for holidays and being the consummate host; these were traits she learned from her mother. There were few things that Angela couldn’t accomplish if she put her mind to it (except for blowing up balloons… true story). Most important to Angela was her devotion to Christ and her love for her family and the love she shared with her husband, John Carter. Angela is survived by her husband, John Carter of Broken Arrow, Oklahoma, son Joshua Caleb Laffoon of Springfield, Missouri, stepdaughter, Abigail Carter of Kalamazoo, Michigan, father-in-law, Richard Carter of Broken Arrow, her twin brother, Anthony Glenn Carney of Oklahoma City, brother-in-law Brian Carter and his wife, Debbie of Tulsa as well as siblings, Michael Max (Eve) Heidling of Durham, OR, Carol Lynn (Mark) Giese of Tulsa, OK, Stanley Craig (Cathy) of Village Mills, TX, Jan Carney Ritz and Dena Carney Jensen, various nieces and nephews, including Melissa Shelby Reiter, Dustin Thomas Jones, Christopher Max Heidling, Lauren Sydney Briley, Zechariah Daniel Carney, Clinton Jenkins and Austen Jenkins. Angela was preceded in death by her mother Carolyn, father Donald, brother Rendy and sister Sydney.

The family of Angela Carter created this Life Tributes page to make it easy to share your memories.

Send flowers to the Carter family.