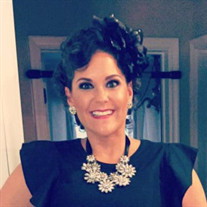 Amity Eileen Ritze, of Broken Arrow, Oklahoma, went home to be with her Lord and Savior on Friday, November 27th, 2020 in her home surrounded by family. She was born July 30, 1980 in Tulsa, Oklahoma to Dr. Mike and Connie Ritze. With a name that means friendship, Amity spent her 40 years on this earth as a true force of nature-- positively impacting many lives with her infectious congeniality, exemplary strength, and unwavering faith. Amity graduated high school from Trinity Christian School in Broken Arrow, Oklahoma in 1998. She received her Bachelors of Science in Biological Sciences (Pre-Medicine) from Oklahoma State University in 2004 and her Masters of Business Administration (Magna cum Laude) from Saint Leo University in 2010. She began her Juris Doctorate at Oklahoma City University School of Law in 2015; while there she received an Advanced Legal Research Award and was the SBA Outstanding Student of the Year. She completed her Juris Doctorate at The University of Tulsa College of Law in 2017 where she also served as Phi Alpha Delta Law Fraternity’s Vice Justice. While a legal intern at the Law Offices of Sherwood, McCormick, and Robert in Tulsa, Amity became a certified member of the Oklahoma Bar Association in 2019; she was sworn in on May 29th, 2020. She will be remembered for her love of travel, jetsetting to the most beautiful beaches, scuba-diving in the most iconic reefs, and sunbathing by the most luxurious pools. You could either find Amity at a concert (most likely New Kids on The Block), out to dinner with friends (most likely at a hibachi-style steakhouse), or shopping (most likely adding to her famous shoe collection). If she wasn’t enjoying the good life, she was making someone else’s life good. Amity took great pride in her many motivational speaking engagements and planning, organizing, and executing countless philanthropic events. But her biggest passion was her family and spending every summer at Table Rock Lake. In December of 2015, Amity was diagnosed with Stage 4 Metastatic Breast Cancer. Rather than be defined by a disease, she used it as a platform to inspire others. Because of the awareness that Amity garnered, in 2016 Governor Mary Fallon signed House Bill 2601 into law, making Oklahoma the 26th state to report a patient's breast tissue composition through the mammography reporting results. Amity then helped establish a Tulsa chapter of Project 31, a community by and for breast cancer survivors. Amity is preceded in death by sister Kelsey Ann Ritze; Grandparents Dr. Ted and Oka Ritze; and Grandparents Elmo and Mary Ann Wilkerson. She is survived by parents Dr. Mike and Connie Ritze; Sister Dr. Heidi Prince and her husband Dr. Andrew Prince; Brother Jamey Ritze and his wife Sydnie Ritze; and Nephews Jude Prince, Jack Prince, and James Ritze, III; Uncle Dan Wilkerson and his wife Michele; Cousins Zahn Wilkerson and his wife Kelly, Matthew Wilkerson and his wife Briana, Whitney Wilkerson and her fiancé Ryan Blackerby; Second-Cousins Kai Bishop-Wilkerson, Daniel Wilkerson, and Charles Wilkerson; and infinite friends who she made feel like family.

Amity Eileen Ritze, of Broken Arrow, Oklahoma, went home to be with her Lord and Savior on Friday, November 27th, 2020 in her home surrounded by family. She was born July 30, 1980 in Tulsa, Oklahoma to Dr. Mike and Connie Ritze. With a name... View Obituary & Service Information

Send flowers to the Ritze family.