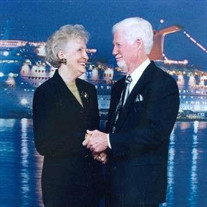 Private family services will be held. Alvin Lee Barker passed to his heavenly home at the age of 92 on April 16, 2021 to join Anna, his beloved wife of 63 years. Alvin is survived by son Kenneth Lee of Bixby, Oklahoma; daughter Kathy Barker Chadwick of Sand Springs, OK; and brother Ted Barker and sister-in-law Deanna Barker of Fort Worth, TX. He is also survived by Grandchildren Nathan Chadwick, Hannah Barker Carey, Ben Steinke; and great grandchildren, Kaley Carr, Reese and Asher Chadwick, Olivia Riley, Fionna and Hamish Carey. Alvin was born November 2, 1928, to Velma and Jack Barker, and they made their home in Laverne, OK, and he was soon joined by siblings Lavonda and Ted. While attending school, Alvin served as high school class president for 3 years and was honored as senior salutatorian. He also played on the school football, basketball and baseball teams, and operated a dairy, to provide milk for Laverne Grocery stores. Following high school, Alvin attended college at Oklahoma A&M (now OSU) in Stillwater, after which he operated the family farm at Laverne. He was engaged to Anna Ruth Scott in August, 1949, and they were married from December 15, 1949, until she joined her heavenly Father March 31, 2013. This union resulted in the birth of Kenneth Lee and Kathy Ann. Alvin then became an accountant for Groendyke Transport in Liberal, Kansas. The family moved to Magnolia, AR in 1967 for Alvin to complete a college degree Cum Laude from Southern Arkansas University, and earn his Public Accounting Certificate. Upon graduation he accepted a position as Treasurer and Accountant for Morrison Engineers in Houston, Tx, living in nearby Alvin, Tx. He later accepted a job in Tulsa, OK as Controller and Treasurer for Trigen Oklahoma. Anna and Alvin both were persons of faith in Jesus Christ throughout their lives, and Alvin served as a Deacon in various churches in Kansas, Arkansas, Texas, and Oklahoma. Mortuary services are being provided by Hayhurst Funeral Home, Tulsa, and a memorial service will be held for immediate family only to avoid Covid exposure. No flowers please; memorial donations may be made to John 3:16 Mission online at www.john316mission.org, or by mail: 506 N. Cheyenne Ave. Tulsa, OK 74103

Private family services will be held. Alvin Lee Barker passed to his heavenly home at the age of 92 on April 16, 2021 to join Anna, his beloved wife of 63 years. Alvin is survived by son Kenneth Lee of Bixby, Oklahoma; daughter Kathy Barker... View Obituary & Service Information

The family of Alvin Barker created this Life Tributes page to make it easy to share your memories.

Send flowers to the Barker family.