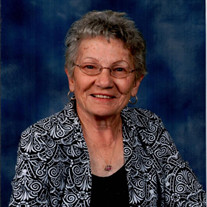 Alice Mae Hallam of Broken Arrow passed away Friday, February 25, 2022 at the age of 92. A memorial service honoring her life will be held 10am, March 4 at First United Methodist Church, Broken Arrow. Alice was born October 28, 1929 in Granite... View Obituary & Service Information

The family of Alice Hallam created this Life Tributes page to make it easy to share your memories.

Send flowers to the Hallam family.