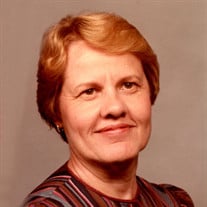 Alice Della Blackmon was born in Porum, Oklahoma on Thursday, October 15, 1936, the only daughter with four brothers to Rufus and Edna (Stephens) Adams. She was the middle child of the five, with two older brothers and two younger ones. She passed from this life into her eternal home in heaven on Tuesday, January 26, 2021 in Broken Arrow, Oklahoma. Alice’s family experienced two different tragedies when she was quite young: her father died in a coal mining accident and then just two months later one of her younger brothers drowned in a swimming accident. Her mother was required to find a job and the family’s extended family all chipped in to help raise the remaining four children. Despite the rocky beginning, Alice blossomed in school and became involved in choir, glee club, yell club, drama and was a cheerleader. She graduated from Henryetta High School in 1954. During those high school years, she met the love of her life, Johnny Blackmon and the two married on November 23, 1953 six months before she graduated from high school. She became the mother of three boys and was a stay-at-home mom the entire time they grew up. Although she did babysit some other children to earn some extra money for the family. The boys remember a time when she watched seven other kids besides themselves for a time. Alice was always active in Baptist churches her entire life, singing in the choir, teaching Sunday School or volunteering in the preschool department. During the years she was a member at Gracemont Baptist and Memorial Baptist Church. Alice was an OU Sooner fan through and through. She was a football season ticket holder and attended many bowl games through the years. She will be missed by all who knew and loved her. Alice is survived by: Sons: John and his wife, Vicky of Tulsa Mike and his wife, Shelly of Broken Arrow Randy and his wife, Tracie of Broken Arrow Grandchildren: Cherish Meade (Bill); Leslie Dingman (Andrew); Sean Blackmon (Melissa); Michael Blackmon (Becky); Casey Blackmon; Brianne Blackmon and Brandon Blackmon. Great-Grandchildren: Mason Meade; Meredith Meade; Olivia Dingman; Emma Dingman; Connor Dingman; Bennett Blackmon; Charlotte Blackmon; Deacon Blackmon; Kinslie Blackmon; Knox Blackmon; Ava Blackmon; and Aspen Newkirk. And numerous nieces and nephews She was preceded in death by her parents: Rufus and Edna Adams; stepfather: Tony Farnell; her husband: Johnny D. Blackmon; and her four brothers: Cecil Adams, Bud Adams, Maurice Adams and Billy Adams.

Alice Della Blackmon was born in Porum, Oklahoma on Thursday, October 15, 1936, the only daughter with four brothers to Rufus and Edna (Stephens) Adams. She was the middle child of the five, with two older brothers and two younger ones. She... View Obituary & Service Information

The family of Alice Blackmon created this Life Tributes page to make it easy to share your memories.

Alice Della Blackmon was born in Porum, Oklahoma on Thursday,...

Send flowers to the Blackmon family.